SEA Games Basketball (Men): Singapore fall 74–87 to Indonesia and miss out on final 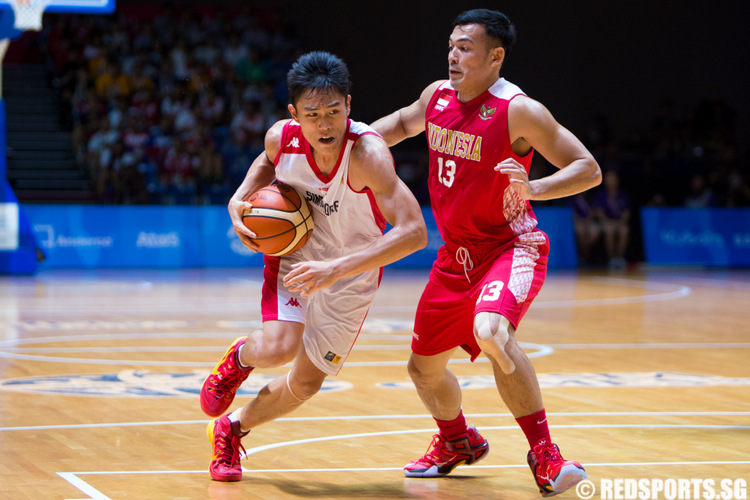 OCBC Arena, Sunday, June 14, 2015 — Singapore went down 74–87 to Indonesia in their semi-final game in the Southeast Asian (SEA) Games basketball tournament to lose out on a place in the final. They will play Thailand next in the bronze medal game on Monday, 15 June, 6pm at OCBC Arena.

Indonesia’s Mario Wuysang and Adhipratama Putra scored two consecutive baskets to give the visitors the first lead. On the other hand, Russel Low registered his second personal foul only three minutes into the game and was subsequently substituted by Delvin Goh.

Wu Qingde converted a free throw to put in the first point for the hosts and the team then chalked up four points to level at 5–5. The Indonesians enjoyed a high shooting percentage as they downed triple threes to quickly extend their lead to 14–6 to give themselves some breathing room over Singapore.

Indonesia capitalised on their outside shots to gradually pull away from the hosts but Qingde took his free throws to keep the deficit in check, ending the first quarter behind by five (17–22).

The visitors wasted no time in extending their lead and parlayed a 7–0 scoring run to lead by 12 points one minute into the second half (29–17).

Although Delvin and Russel did diligent defence in the paint to force several turnovers, Singapore were plagued by a low conversion rate. Singapore made valiant offensive efforts to close down the lead but failed as Indonesia were finishing well and led 42–30 going into the halftime break.

Indonesia poured in six points to start off the third quarter, before Delvin converted an offensive rebound to stop their scoring streak. Trailing 32–51, Ng Hanbin drilled a two to give the hosts a much-needed confidence boost. Russel also stepped up on his offensive game, scoring through cut-ins and free throws in hopes of closing the gap, but to no avail as Indonesia continued to make their shots count.

Qingde was Singapore’s most consistent player on court both offensively and defensively, but registered his fourth personal foul at 40–56. Thereafter, Desmond Oh ran into an unanticipated incoming screen and was knocked out cold. He was stretchered out and had to be sent to the Singapore General Hospital.

With under two minutes, Singapore put together nine points to trail 49–62 going into the decisive final quarter.

Delvin started off the fourth quarter strong for Singapore with an aggressive finish in the paint against two defenders (51–62). Following that, Indonesia’s captain Arki Wisnu exited the game with five personal fouls.

Despite that, Singapore were still unable to completely shut off Indonesia’s offense. Singapore trailed 17 points with four minutes remaining in regulation (51–68). The hosts employed a full-court press in the final three minutes, but Indonesia broke the press within eight seconds and found space for easy shots.

Singapore found themselves down with a team foul and with one minute to go, Larry committed his fifth foul to go out of the game. He had a game-high 16 points in the game.

Towards the end of the game, Lim Shengyu fell awkwardly after he was fouled on a layup. He too, had to be stretchered out.

Even with four personal fouls, Qingde was still making a difference in the game, but then he committed his fifth and had to exit the game with 20 seconds left. Singapore fought till the end, registering an evenly-matched second half but it was not enough to secure a final berth (74–87).

“I think basically, they gave themselves too much pressure. We didn’t start off well and especially when we are down and we need to catch up, we were not disciplined to execute. I’m pretty disappointed on this area, we didn’t stick as a team,” said Singapore head coach Neo Beng Siang.

“I think they deserve the win. They played aggressive and we’re playing to their momentum. Basically they just play hard and they have more hunger for the win. They play like there’s no tomorrow, so basically we fall back on that.”

“We’re too down so hopefully they can get back straight away. It’s going to be tough for us especially after the loss. But we need to get ourselves up, maintain our bronze medal. Towards the end, everybody from the players to the coaches have to stay positive. It’s up to the players on how they bounce back.”

On Desmond and Shengyu’s injuries, he added, “I’m just going to pray for the best and hope they will be good to go for tomorrow. If not, the rest of the team will have to step up. We’ll come out stronger.”

“I’m just gonna play hard, there’s no more pressure. Just gonna keep playing no matter what and dive for every loose ball. Got to play better than today,” commented Wei Long. “I just want to go out there and enjoy the last game of the SEA Games and I believe everybody will come out stronger.”