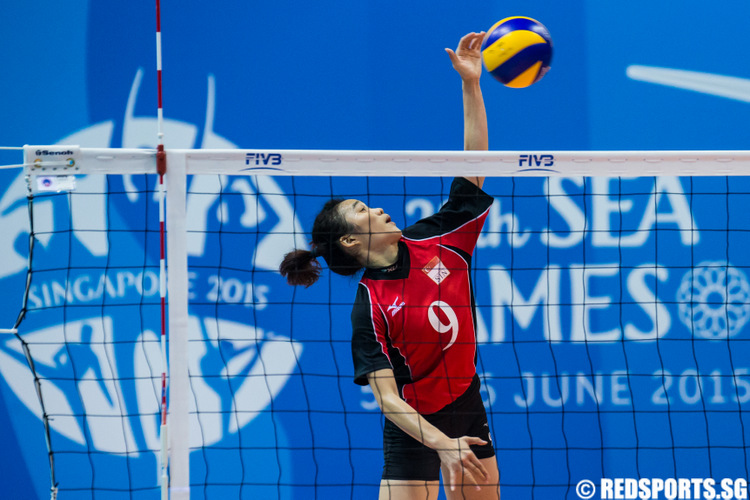 OCBC Arena, Friday, June 12, 2015 — Singapore went down 0–3 to favourites Thailand, despite putting up a good fight in the second and third sets of the women’s volleyball competition at the 28th Southeast Asian (SEA) Games.

“I think we played relatively well as compared to our past performance,” commented Quek Soo Teng (#6), team captain for the Singapore women’s volleyball team.

The home team got off to a slow start by committing many unforced errors that cost them the set at 6–25.

“For the first game our team was nervous as well, so in the beginning it was a bit shaky but along the way we got the momentum and played better,” added Soo Teng.

Singapore picked up their game in the second set to fight back and gain their first lead at 7–6. Still, this was insufficient as Thailand was quick to win back the lead with confident play, finishing the set at 25–15 over the home team.

Despite putting up a great fight, the Singapore team’s performance was not enough to fend off the Thais who, with their decisive and targeted spikes, claimed several winners from our girls.

The match eventually drew to a close at 14–25 with a last winning spike from the Thais.

Of their Thai opponents, Soo Ting said, “their team is relatively very young. They have 2 very young players playing with us this morning and they didn’t really put in their main squad. But they are strong in that their spikes are very powerful and they’re fast in their game.”

To manage their Thai competitors’ strong spikes, the captain commented, “I think for the longest time we have been training on our defence so much that we try to adapt to their spike and keep our hands and posture. This is so that we can receive with the kind of posture that allows the next player to go up for the ball.”

Nevertheless, the girls are confident of their next game against Myanmar. Singapore will need to win the next match to qualify for a medal standing.