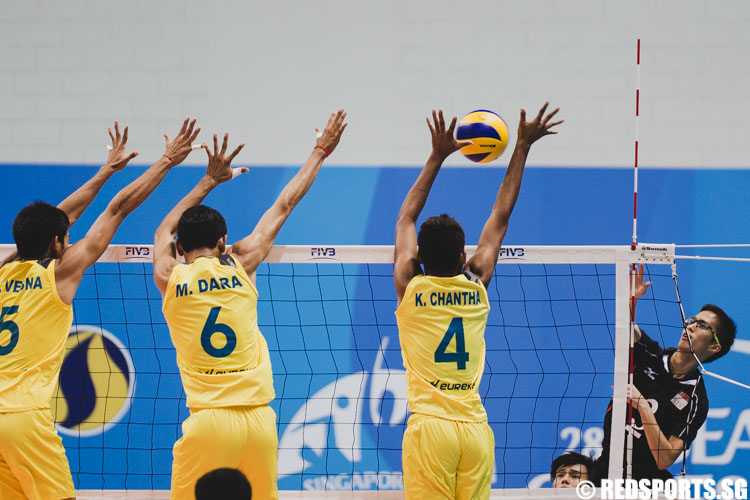 OCBC Arena Hall 2, Wednesday, June 10, 2015 — Singapore were defeated 3-0 by Cambodia in their first match of the men’s volleyball event at the 28th Southeast Asian (SEA) Games.

It was their first appearance at the SEA Games since 1993, when Singapore last hosted the Games, and also their first international competition.

Singapore trailed Cambodia throughout the first set, with 8 points being the largest point difference in the match. Despite attempts to close up the scoreline, Singapore’s efforts proved futile as the set went to Cambodia 25-19.

The second set saw Singapore tighten their game plan to come back stronger as they kept the scoreline tight up to 9-9, where they had their first breakthrough over the Cambodians with a successful block in by Javier Poon (#3) and Daryl Lee (#13). However, it was not long before the Cambodians came back to equalise the score at 15-15. Nonetheless, a service fault by the Cambodians put the Singaporeans back in the lead. But the set was not to be Singapore’s, as the Cambodians eventually caught up at 22-22 to close out the set at 25-23.

They eventually lost the third set 16-25 to finish the game without a single set win.

Said captain Javier Pooon (#3) about the team’s performance, “I feel that this wasn’t our best performance. Maybe it was due to the pressure and expectations of the crowd, although it is not an excuse for us to not play up to our standard. Moving forward, however, we have two more matches to go (in this round robin). We will definitely want to try our best even though our opponents are stronger than Cambodia, because Indonesia and Vietnam were seeded in the last SEA Games. But we will definitely put up a good fight against them.”

The men’s team will play Indonesia on Friday, June 12, at 7pm.