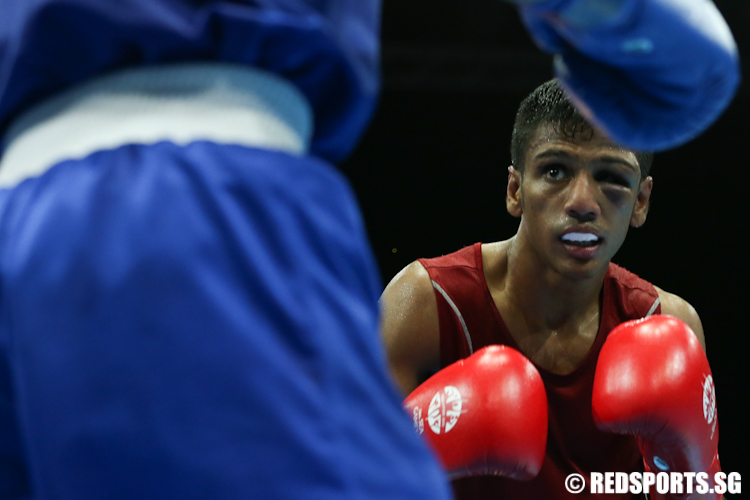 Despite tough efforts to fend off his aggressive opponent, Hanurdeen’s efforts were quelled with half blindness from a previous injury that caused his left eye to swell profusely. He had sustained a cut underneath his left eye after an accidental head butt with Myanmar’s Maung Nge in the first round. The injury had then worsened, with the swelling almost completely forcing his left eye shut. Nonetheless, Hanurdeen competed in the final match today against his doctor’s orders.

Bautista capitalised on this, and was quick to throw jabs and left hooks at Hanurdeen near the site of his injury once the starting horn was blown. And while there were moments of opportunities for Hanurdeen to attack against Bautista, they proved insufficient as the latter managed to score more against him.

With regard to his injury’s impact on his performance today, Hanurdeen said, “(The injury) definitely (had an impact). The doctor actually said I should call it off because my eye injury was quite bad. But luckily yesterday I had a rest day so I had one day to recover as much as I could.”

“Then in the finals I had to literally box with one eye because I couldn’t see with one eye, but this is not an excuse,” the silver medallist added. “If I would have boxed with both eyes, I would have expected a much better performance. I really wanted to perform well and take home gold in my home ground. But still, with one eye I managed to complete three rounds and I’m happy with my performance.”

Nonetheless, Hanurdeen recalled that his most satisfying fight during the Games was his match against the Burmese in the semi-finals. Following his performance here, Hanurdeen said that he will be taking a break before going to serve his National Service before planning for his future in boxing again.