SEA Games Softball (Women): Singapore go down 1–2 to Thailand to settle for bronze 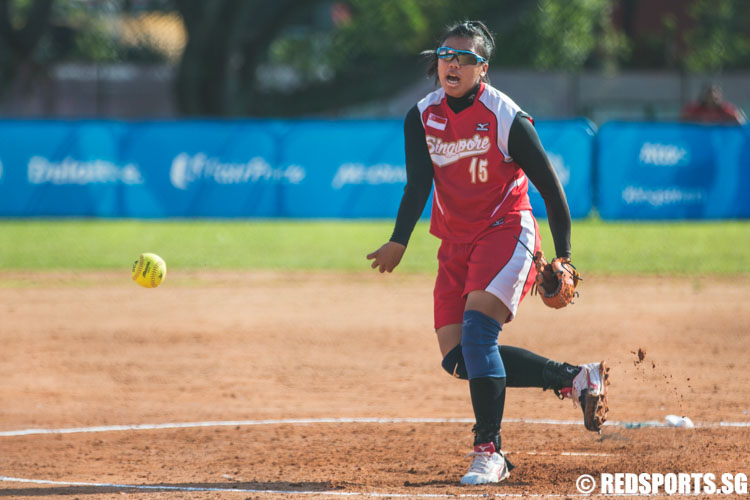 Kallang Softball Field, Tuesday, June 10, 2015 — Singapore went down 1–2 to Thailand to for the bronze at the Southeast Asian (SEA) Games softball tournament.

Singapore scored first in the top of the third inning before giving up a run in the bottom of the fourth.

“Actually I think we were all trying to keep calm, because we knew that if we kept calm, we could hold them and play a tie breaker and overturn the whole game. Overall we played well to hold them and kept the game tight,” said Magdelyn Chow Ming Ying (#23), captain of Singapore.

The game was stuck at 1-1 for the next few innings before Thailand won the game in the bottom of the seventh.

“I wouldn’t say it’s disappointing. For us, our goal was to get a medal. For this game, our goal was to play better than we did in the preliminaries. When we finished second in the round robin, we were already very happy to have won a medal,” said Magdelyn.

“(The younger players) performed really well and I think our team is stronger than the previous SEA Games team actually. From a very messy team we actually came together really well and we kept the errors to a minimum.

“It’s a good experience for the younger players and this will help them in the next SEA Games. This is actually the last SEA Games that I’ll play and I’m stopping after this. To those who are going to retire, I want to say well done. We trained really hard and fought really well. To the younger ones, try to fight harder and press on to get the other colours,” added Magdelyn.