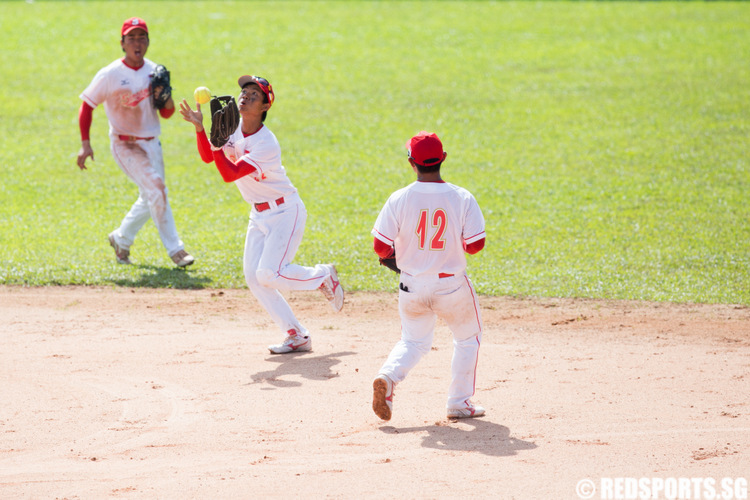 Kallang Softball Field, Wednesday, June 10, 2015 — Singapore went down 0–4 against Indonesia in the playoff of the 28th Southeast Asian (SEA) Games softball tournament. With this loss, they had to settle for the bronze medal.

Singapore had earlier faced Indonesia in the preliminaries, beating them 2–0.

Singapore gave up a three-run home run to Dermawan Dikdik (IND #3) in the top of the first. Singapore were unable to hit past the infield in the bottom of the first.

“I think we didn’t get a good start. The team was all warmed up psychological, physically and mentally. Nonetheless the opponents got a better start. Have to give it to the Indonesian team as they wanted it as much as we wanted it. It was not going be easy especially against a team like Indonesia,” said Ivan Ng (#11), captain of Singapore.

Singapore’s deficit swelled to four runs as Indonesia added another run in the top of the second (4–0). Singapore finally got a runner on first in the bottom of the second with two outs on a walk, but he was unable to make it round to home.

“Whoever got the lead would have had the upper hand. We had a couple opportunities with runners on base, but we couldn’t come through. No one goes for the home run, but when it comes, it comes. Unfortunately this just wasn’t our day.” said Ivan.

A call to the bullpen saw Jeron Tan (SIN #21) coming out to pitch, as Tan Jun Jie (SIN #18) took the bench to record the last two outs of the inning. Indonesia’s bid for a no-hitter was eventually broken in the bottom of the fourth, with Ivan hitting a single down the middle.

“I think I did really well, but our team still can be better. At the start of the game we weren’t connecting well and couldn’t hit,” said 15-year-old Jeron Tan (SIN #21).

A pick off play in the bottom of the fifth where the runner, Joshua Tam (SIN #4), was called safe resulted in both teams clearing the bench and stepping onto the field. The game only resumed after the team managers were brought out and settled the issue with the umpires.

“We’ve had previous encounters with Indonesia and in the heat of the game, it caused emotions to rise. This pretty much always happens in softball. During the game we have our differences, but after we are friends,” added Ivan.

Singapore left two runners on base at the end of the fifth inning as the game headed into the sixth with Indonesia leading 4-0.

Singapore were unable to capitalise on a single by Ivan Ng (SIN #11) and Chew Jee Boon (SIN #19), which resulted in no runs scored in the bottom of the sixth. Unable to score any runs in the seventh, Singapore went down 0–4.

“It’s my second SEA Games and for some, it’s their third. This team is actually much closer together. The journey for the whole team is really memorable. At the end of the game you can tell how emotional the players are. It is really heartwarming to see our families and friends in the stands,” said team captain Ivan.

He added: “I think Jeron was our most valuable player. He’s only 15 years of age and you’ve seen what he can do out there and he’s always pushing himself to the next level. I think our shortstop played really well too. He’s been training a lot at other positions, but stepped up (as our regular shortstop was injured) and filled the position really well, making spectacular plays. These are the players that made the game.”