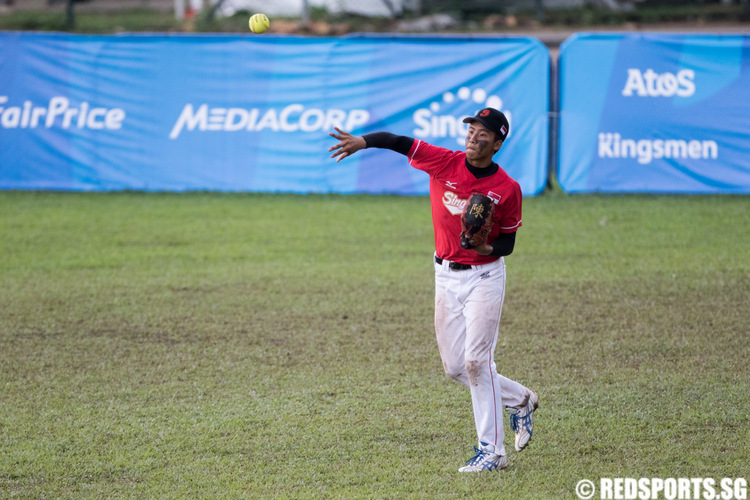 The game started with neither team able to break into the hit column. A double play by pitcher Jeron Tan (SIN #21) prevented Philippines from gaining momentum after a base hit in the second.

Ivan Ng (SIN #11) led off for Singapore with a double in the top of the second. However, they were unable to score as Philippines got a double play to neutralise the threat with none out.

Ben Maravilles (PHI #12) led off the third with a solo home run to break the scoreless game. Philippines continued to load second and third base with runners. An intentional walk loaded the bases, and Singapore got a ground ball to pick up the third out of the inning.

With three innings played,the game was paused for an hour due to bad weather.

Philippines managed to string a couple of hits off Jeron Tan (SIN #21) to extend their lead to 5–0. With a runner on second with one out, Ngiam Jun Jie (SIN #18) was brought in to pitch and he collected the two outs without giving up any runs.

Singapore managed one hit in the bottom of the fourth by Joshua Tam (SIN #4) but failed to return as he was called out in a double play that ended the inning.

Singapore’s deficit swelled to eight runs (8–0) as Philippines collected three more runs in the top of the fifth. Singapore was handed a lifeline when Chew Jee Boon (SIN #19) was hit by the pitch and Niels Aplin (SIN #27) came in as a pitch runner.

However, Singapore were unable to score any runs, and went down 8-0 as the mercy rule came into play. The mercy rule comes into play when a team is down seven or more runs in the fifth inning.

“”I think we did pretty okay today before the rain, we did very well defensively at the start holding them 1-0 till the third but they managed to string together hits and started scoring,” said Singapore captain Ivan Ng.

Singapore will play against the winner of the semi-final game between Malaysia and Indonesia for a chance to play in the final.

“I think we will be up against Indonesia next as they beat Malaysia 10–0 in the preliminary rounds. We are actually preparing to face Indonesia now. Philippines gave us a bit of encouragement saying that we were a team that deserved to be in the finals and we told them that we’d like to see them in the final too,” added Ng.

“It’s definitely an enjoyment as we have our family and friends here to support us. The players want to step up the game, but it’s important for us to not get distracted and just play the way we should in the game.

“It was quite a close call against Indonesia. As you can see from the score line it was only 2–0, the important thing for us is to make sure that we keep our defence tight and make no errors.

“Philippines is made of a team of veterans, getting used to a pitcher’s pitch takes some time but they are a team that qualified for the world series. Nonetheless they are veterans and they managed to get used to the pitch pretty well. Right now I know that we already got a medal, the only thing now is what colour medal do we get,” said Ng.

More photos will be added later