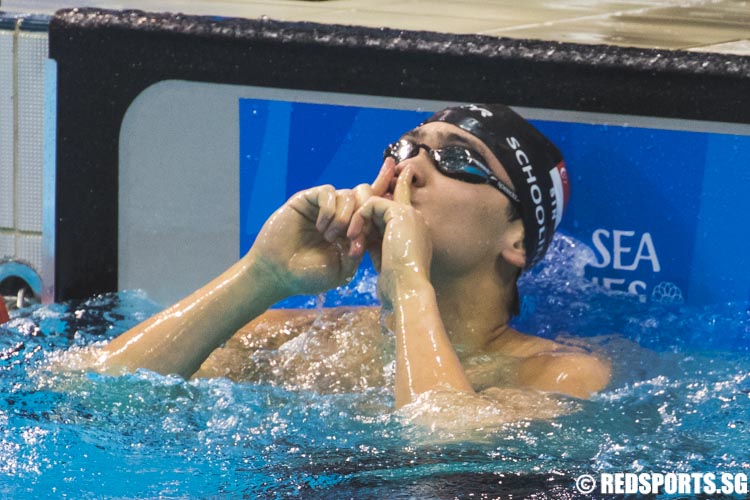 OCBC Aquatic Centre, Monday, June 8, 2015 — Team Singapore continued its rampage in the pool at the 28th Southeast Asian (SEA) Games with a haul of six gold, three silver and one bronze on the third day of SEA Games swimming.

Continuing where he left off yesterday, Joseph Schooling managed to do what a few generations of freestyle specialists before him had failed to do: break the longest-standing record in Singapore history.

Joseph’s sensational time of 22.47 seconds was a new Games and national record. He finished half a body length ahead of the rest, a feat even more unheard of in a 50m sprint. His compatriot Clement Lim finished out of the medals in seventh with a time of 23.59s.

The 50m freestyle record of 22.69s, which was set by swimming legend, Ang Peng Siong, would have stood for 33 years come 20 August 2015. Said Peng Siong about the feat: “Now is the time to move on. I hope this inspires the next generation of young swimmers to take on the world.”

Satisfied with his fourth Games record, Joseph commented: “It’s a huge relief that I broke Uncle Peng Siong’s record. That really means a lot to me. I was also doing it for all the kids who passed away in the earthquake, it was a huge tragedy. So I had those two things in the back of my mind when I was swimming the race.”

“Honestly, I think my dad’s more excited about me breaking Uncle Peng Siong’s record than I am, so I kind of did that one for him as well. It’s another good day and I’m happy that it’s over,” said the 19-year-old.

Later, Joseph smashed his own Games record in the men’s 200m butterfly with a new personal best (PB) of 1:55.73, which is the seventh-fastest time in the world this year. In that event, compatriot Quah Zheng Wen, who had earlier competed in the men’s 200m backstroke, finished in second place one body length behind. He clocked a PB of 1:56.79.

Joseph said that he was ‘fortunate and glad’ to have been able to achieve his results on Monday night. On his current performance in the Games, Joseph said he is “on track… After (winning the 200m butterfly), everything gets a lot easier, so I’m happy about that and I’m going to have some fun tomorrow.”

In the third race of the evening, Quah Ting Wen wrestled the women’s 100m freestyle title back from Thai rival Natthanan Junkrajang in a new Games record time of 55.93s. This is her fastest time in a non-textile suit. Her national record is 55.57s, which she set at the first Asian Youth Games in 2009.

“I’m very, very, very happy,” said an ecstatic Ting Wen. “I was actually a little bit nervous before the event. Yesterday, I had the 50m butterfly which was my first individual event. But to me, the butterfly events are all fun. The freestyle though, it’s a little different as I get a bit more nervous with them actually. So today, I just let my nervous energy take me on the first 50m.”

In this race, Ting Wen had to fend off strong competitors. “I could actually see everyone coming up on the right. I breathe on my left but I could still see everyone in the corner of my eye. So I just tried to hold on and I’m glad it worked because it was a very close race,” she explained.

However, she did not enter the race with an aim to regain her title. “It isn’t just a way to erase that result as to me, this meet is something by itself. I’m just really enjoying the experience and not even thinking about Myanmar at all,” commented Ting Wen.

Her brother, Zheng Wen then kept up the winning streak in the next event by setting a new Games record in the men’s 200m backstroke. He clocked 2:00.55 to break Filipino Raymond Papa’s 18-year-old record by 0.41 seconds. SEA Games debutant Malcolm Low finished seventh in a time of 2:08.25.

Zheng Wen said, “I am pretty encouraged by my times. I didn’t go as fast as I would have liked for the 200m backstroke, but it was still a Games Record and a win for Team Singapore. As for my 200m Butterfly, I went in with really high lactic levels and very little rest. I still managed to make the “A” cut for the Olympics… I think leading up to the Olympics, this has really given me the confidence boost that I need. So I am pretty satisfied overall with my performance today.”

On the other hand, teammate Malcolm was slightly discontented with his result. He said: “It was pretty disappointing for me. I was seeded fourth going into the finals, but I didn’t do my best time in the end. From this experience I’ll train harder and do better the next time.”

“It’s an honour representing Singapore on home ground. The support has been really great. It gave me goosebumps when I was coming out onto the deck, and I’m just really happy that I made my debut in this SEA Games instead of the next one which will be in Malaysia. But every SEA Games is a different experience, so I’m hoping to go for the next one too,” concluded Malcolm.

Earlier, Tao Li had set the stage for Team Singapore as she led from start to finish in the women’s 50m backstroke to rewrite the Games record she had just set in the morning with a time of 28.90s. This equalled her personal best first set at the 2013 FINA World Championships. Teammate and national record holder Shana Lim swam a 29.36s for the first of two one-two finishes for Singapore.

When told she had amassed 26 SEA Games golds so far, Tao Li sounded surprised. “I didn’t count at all. I don’t know how many gold or silver medals I’ve won already but every time I win, I know that my hard work has paid off and that it has been worth it to train overseas. I didn’t receive much positive talk about myself, but tonight I’ve proved that I still can do it.”

After this SEA Games, swimming will take a backseat for the spunky swimmer, as she has decided to forgo the 2016 Rio Olympics.

She said: “I think I will still go for one more Asian Games, but I will focus less on swimming because I have to finish school and graduate… I will focus on my studies more than swimming because for the last two years it’s been the other way around.” Tao Li is currently enrolled at the Singapore Institute of Management (SIM), and has one and a half years more to go.

Teammate Shana was also happy with the result. “I swam my best. I’m happy with the time and I’m happy to even just be participating in this SEA Games. It’s a great way to end off my career in swimming. That was the last 50m backstroke event that I’ll ever swim,” she said.

“I’m a little bit disappointed (that I didn’t get the gold) but I’m glad that Tao Li was the other Singaporean who managed to get the gold medal. For us to finish one-two, it shows that we dominated the event as well,” concluded Shana.

The last race of the evening saw Quah Ting Wen produce a brilliant come-from-behind swim to lead the women’s 4x200m freestyle relay team to victory. The team, which was trailing Thailand after the third leg, returned a time of 8:12.95, just 0.48s ahead of the Thais. Ting Wen’s 1:59.90 anchor leg is the fastest-ever split by a local swimmer.

Said third swimmer, Rachel Tseng, about the close battle with the Thai team, “They definitely gave us a good fight. It was good to have such great competitors to spur us on.”

Ting Wen credited the home crowd to helping the team pull away with the nail-biting win. “The home crowd definitely helped (us win the race)… just knowing that I’m swimming for something much bigger than myself.”

In the only other event on Day 3 of swimming, Roanne Ho clocked a personal best of 1:11.78 in the women’s 100m breaststroke to finish in second place, while Samantha Louisa Yeo finished third in a time of 1:11.87. Malaysian Phee Jinq En won the race in a time of 1:10.47.

“I think it means a lot as there’s eight of us and all of us are really close in terms of standard. So to be able to get second and third is actually really amazing,” said Roanne on the feat.

Teammate Samantha agreed. “Both of us getting medals is fantastic and I would say countless times that we were up against tough competition… Both of us put in our best effort and I think we’re both really happy,” she said.

“Although it’s not my PB, I’m getting there, as this result marks the second time of the year that I’ve gone under 1:12,” added Samantha.

Day 4 of swimming will see Quah Ting Wen and Tan Jing-E take to the pool for the women’s 200m butterfly, where they will aim to dethrone defending champion Kittiya Patarawadee of Thailand. They will also be up against Vietnam’s multiple gold medallist Nguyen Thi Anh Vien, who has the fastest seeded time.

Joseph Schooling is likely to see off competitors from Indonesia, Vietnam and Philippines in the men’s 100m butterfly as he continues his bid for nine gold medals at these Games. Compatriot and SEA Games debutant Dylan Koo will do well to lower his PB of 55.79s, set earlier in April.

Singapore swim queen Tao Li will defend her women’s 100m backstroke title against Nguyen, who has a faster seed time. However, she would have finished the gruelling 200m butterfly barely 40 minutes earlier, so it could be anyone’s race. Singapore’s other competitor in this event is Hannah Quek, who swam in the 200m backstroke yesterday.

In the men’s 400m individual medley, Zheng Wen, who won this event at the last two editions of the Games will face off against Vietnamese Tran Duy Khoi, who was third in 2013. Pang Sheng Jun, who finished joint-6th at the last Games, could also make it to the podium this time.

Zheng Wen, whose first-ever SEA Games gold medal came in this event, will be looking to join the ranks of Filipino Miguel Molina and Thai Ratapong Sirisanont, who have won consecutive titles in this event at least three times each.

In the last individual event for the day, Ting Wen will be looking to upset Thai veteran Natthanan Junkrajang in the women’s 200m freestyle. It will be a close race though, as the Vietnamese girl Nguyen and Philippines’ Jasmine Alkhaldi have also posted competitive times.

14-year-old Christie Chue, who will be competing at her first Games, will make her individual debut in the 200m freestyle. She has already bettered her PB in this event twice this year, and will surely be looking to go even faster in her first of two events at these Games.

The last race of the evening is the men’s 4x100m freestyle relay. Team Singapore’s seed time is already faster than their own Games record set in 2013, so the question on everyone’s minds tomorrow night will probably not be ‘will they win’, but rather ‘how much faster can they go?’