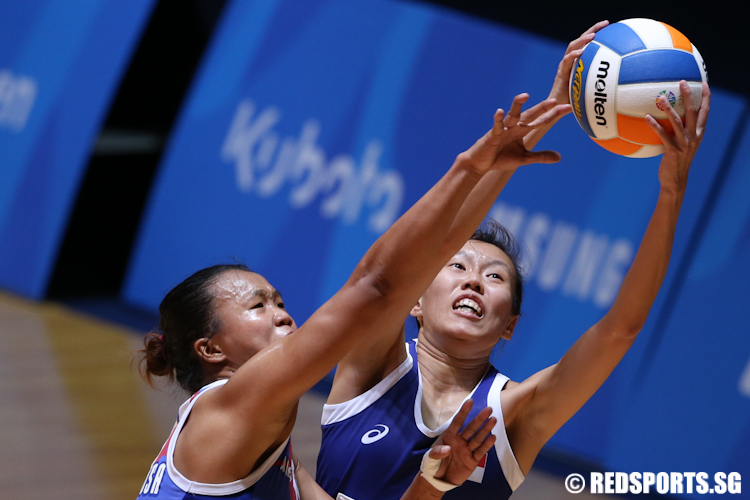 Buenacosa (GD) of Philippines tries to intercept a pass made to Pamela Liew (GA) of Singapore. Singapore beat Philippines 84–12 and will face Myanmar on 4 June, 7pm, at the OCBC Arena. (Photo 1 © Lee Jian Wei/Red Sports)

Singapore have guaranteed a semi-final spot with today’s victory.

“(Going into today’s game), we wanted to work on our consistency in the quarter. Despite having different combinations on court today, we were still able to deliver a certain number of scoring,” commented Singapore captain Lin Qingyi.

The hosts bounced back from yesterday’s unexpected draw against Malaysia and started the game strong.

The four-month-old Philippines team could not break through Singapore’s defence. It took Philippines seven minutes before they sunk in their first goal. On the other hand, the hosts breezed through the court to lead 21–3 after the first quarter.

Philippines stepped up their game in the second quarter and scored five goals in the first five minutes of the quarter. However, that was all they could muster at the offensive end. Singapore’s Wing Defence, Shina Teo, was the hero of the quarter. Despite being the newest member of the team, her outstanding interception rate kept the Philippine attack dumbfounded. Singapore led 40–8 heading into the half time interval.

“Young Shina has shown her confidence on court and went out for multiple balls. However, she needs to improve on her execution of her passes,” Singapore coach Ruth Atiken commented.

In the second half, Singapore continued to dominate the court and could afford to try out different combinations of players on both the offensive and defensive ends.

“It was great to see Huifen playing at three different positions and she was a great leader on court. We wanted to continue to add more stuff to our game play by trying out different combinations,” said Atiken.

Singapore eventually wrapped up the game 84–12.

“It has been a stressful journey. During the past four months, the girls started from scratch. It has been a positive experience thus far for our girls and the coaches. We did not know what to expect for this tournament. All I wanted was for the girls to play their best,” said Philippines coach Fransien Howarth.

Philippines currently hold a 0-0-4 win-draw-loss record while Singapore are at 3-1-0.

Philippines will need to win tomorrow’s game against Brunei in order to qualify for the semi-finals.

Singapore will play against Myanmar tomorrow, 4 June, 7pm, at the OCBC Arena.