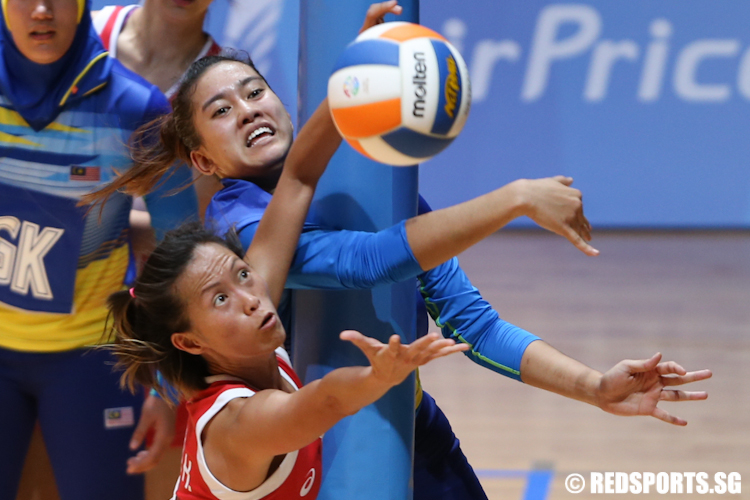 Chen Huifen (GA) of Singapore tries to catch the ball that was deflected away by Noor Azhar (GD) of Malaysia. (Photo 1 © Lee Jian Wei/Red Sports)

OCBC Arena, Monday, June 2, 2015 — Singapore led for three quarters but Malaysia came back in the final quarter to force a 35–35 draw at the final whistle in the Southeast Asia (SEA) Games netball tournament.

In front of a full house, Singapore led by six points (30–24) at the end of the third quarter. However, Malaysia went on an 11–5 run in the final quarter to ensure they shared the points. Singapore won their first two games, beating Brunei and Thailand. Both teams now have a 2–1–0 win-draw-loss record.

“I am disappointed and happy at the same time. (I am) disappointed that we didn’t get the win and some bits and pieces of our play. I was expecting to have a close game.” said veteran player Premila Hirubalan, who earned her 100th cap today.

In the second quarter, Malaysia shut down Charmaine Soh in the first half of the quarter with tight man defence and forced Goal Attack Chen Huifen to take the lead in shooting. However, Chen Huifen struggled, allowing Malaysia to creep back and narrow the deficit to three goals.

Both Singapore and Malaysia made changes to their lineup in the third quarter. Ang Shiqi came on as Singapore Wing Defence while Lin Qingyi and Premila Hirubalan took up the Goal Keeper and Goal Defence roles respectively. The trio proved to be effective. Their agility and chemistry helped Singapore destroy Malaysia’s attack and Singapore extended the lead to 30–24.

Heading into the final quarter, Malaysia tightened up their defence and put the hosts under great pressure. Singapore’s shooters Chen Huifen and Charmaine Soh had a dismal shooting outing, taking five minutes before scoring the first goal.

On the other hand, swift movements by Malaysia’s shooters Fazira and Izyan Syazana in the goal circle aided their midcourts to feed them easily and they tied the game at 31 apiece with 6:31 to go.

In the dying minutes, both teams delivered conservative passes, not allowing either team to have any steals which eventually resulted in a 35–35 draw.

“We came into the game knowing that it is going to be a tough fight and Malaysia had a wonderful performance today. We tried to widen the gap when we had the six-point lead. Malaysia were very hard on the ball. Almost every ball that we got, there was some form of body contact. We took some time to adjust,” Singapore’s captain Lin Qingyi.

“The shooters are under a lot of pressure today to perform and that’s something that could be easily fixed.” added Lin Qingyi.

“Charmaine had a good start and that got us the lead. She should not blame herself for the final quarter,” Singapore’s coach Ruth Atiken commented.

“Defensively, we did well. Chen Li Li did well in the first quarter and Premila and Micky (Lin Qingyi) supported superbly. We had sufficient turnovers for the games but it is what we do with the ball,” Ruth Atiken added.

Despite today’s draw, both Malaysia and Singapore are still the hot favourites for the final.