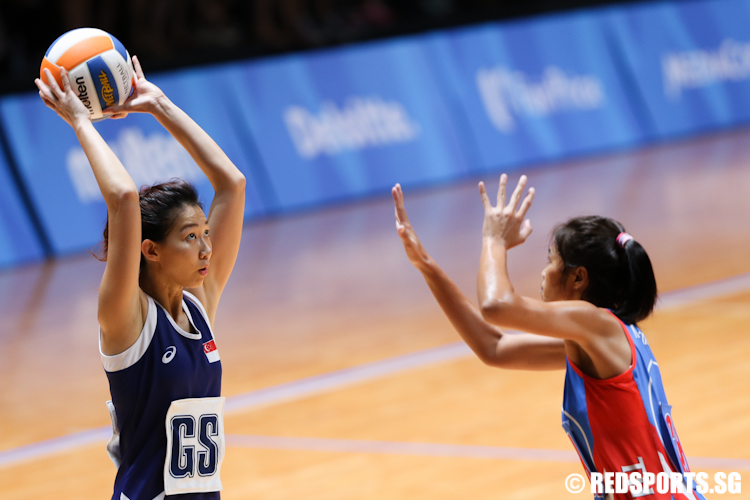 Shooter Yasmin Ho led the hosts with a perfect field goal percentage in just two quarters of play, shooting 20 for 20, which was a marked improvement from yesterday’s game against Brunei.

The Thais were led by former national coach Chng Li Li, who has been travelling around the region to aid in the development of the sport. Chng also spearheads the netball teams at National University of Singapore, Raffles Institution, St. Margaret’s Secondary and Cedar Girls’ Secondary.

“I’ve been helping the Thais for more than 12 years now. Since they started, I have been helping with the development of the coaches, players and umpires,” said Chng, who coached the Burmese during the Mission Foods Asian Netball Championships in September last year.

“It’s important to help netball grow in the region because if we don’t have enough teams, the game cannot go on. And it’s nice to get to know one another’s culture and introduce to our regional neighbours the beauty of the game that we really love.”

On preparing her charges against the familiar Singaporean side, Chng said, “What these girls lack is international exposure so I told them to just focus on their attack and running past the defence.”

In the opening quarter, the hosts overcame a spirited Thai side to take a 12-point lead through the help of Goal Shooter Charmaine Soh, who was perfect from the field in the frame. She eventually finished the game on 78 percent shooting, knocking down 28 of her 36 attempts.

Additionally, the presence of Goal Keeper Chen Li Li posed problems for the physically smaller Thai shooters, while Games debutant Shina Teo, who took over Premila Hirubalan as Wing Defence, had a sterling defensive effort with five steals in the second quarter, contributing to a 21-point lead at the half.

The Thais regrouped and held their ground after the break, keeping pace until the Singaporeans closed out the quarter with four unanswered points.

In the final quarter, Singapore used a 10–0 run in the first nine minutes to close out the game, giving the hosts their second straight victory in the Games.

“Today’s performance was better than yesterday’s, where I was a bit nervous because this is my first time experiencing such a scenario,” said Teo, who finished the game with eight steals.

“It was a good experience and we all learned from the first game, after discussing what we could improve on. That made me deliver a better game.”

Crediting her performance to the rest of her teammates, the 19-year-old added, “When I make an interception, someone is always there for me to pass the ball to, so it’s very much a team effort and not mine alone.”

Despite the loss, Thai coach Chng was pleased with her charges.

She said, “They did a fantastic job in the third quarter and overall, they are getting better.

“It’s the exposure that they need to have and they need to learn how to handle the atmosphere and pressure well. This is just something that they are lacking now and we have to work on that game by game.”

“Both Shina’s and Yasmin’s confidence have grown after the game yesterday and I thought both of them performed well and it’s really good,” said Singapore head coach Ruth Aitken, who rated the team’s performance 7.5/10.

“I thought that we made some errors in our passing at different times,” added Aitken.

“Often, we didn’t start so well in the quarter but finished strongly, but it’s really about starting right and maintaining it after.”

Singapore will next face causeway rivals Malaysia on Tuesday, June 2, 7 pm, at the OCBC Arena.

“When you play a team like Malaysia, it is how you approach them, so both coaches will be thinking whether to get more players out tomorrow night or just stay with the starting seven,” said Aitken.

“Now that we’ve got this game over, I’ll put my thinking cap on for the game against Malaysia.”