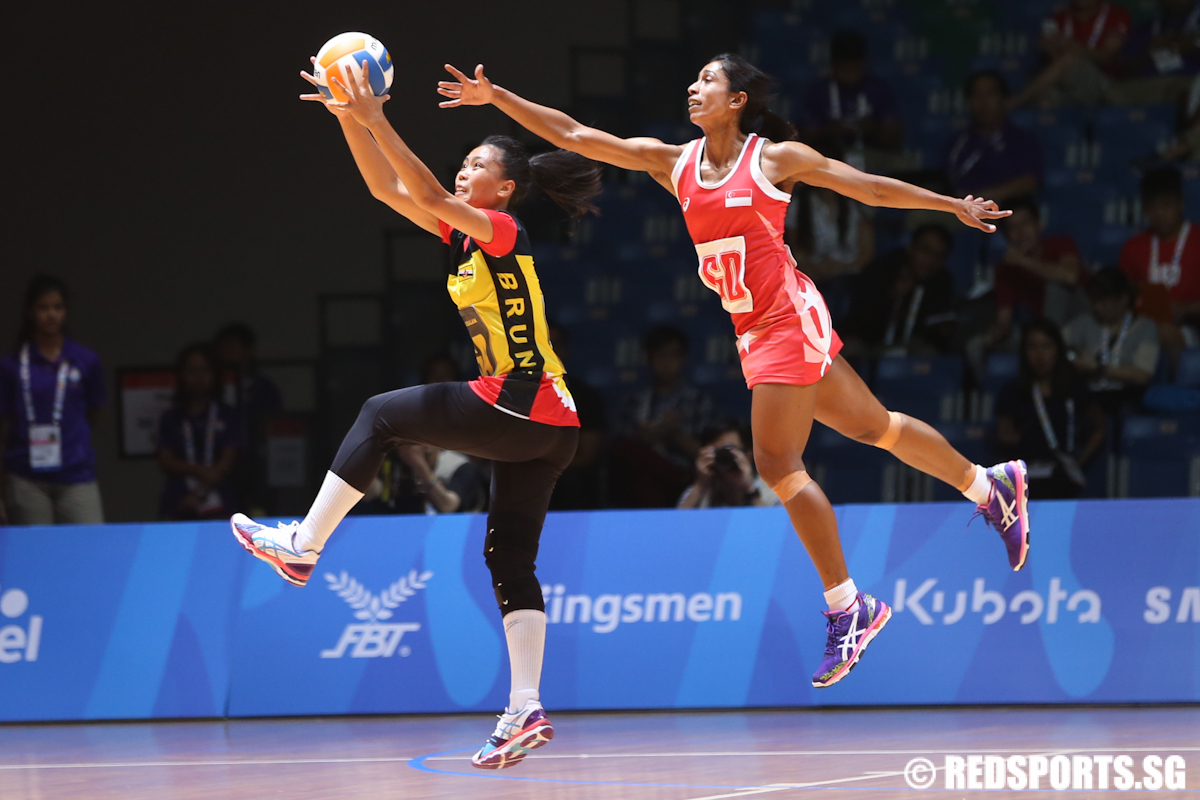 This is the second time netball is featured in the Games. The last time the sport was played in a SEA Games was in the 21st edition in Kuala Lumpur, Malaysia, where Singapore finished in second place.

“We’ve been practising for so long, so it’s lovely to finally be in the competition,” said Singapore head coach Ruth Aitken.

“Brunei really improved their play throughout the game, and they’ve shown improvement from last year, and this is great for netball in Asia.”

The speedier and physically imposing hosts dominated on both ends of the floor, as they blitzed to an early 19–6 lead. Premila Hirubalan, Ang Shiqi and Nurul Baizura, who started at Goal Defence, Wing Defence and Centre respectively, were effective in closing down on their opponents, forcing several turnovers.

The Singaporeans continued their sterling form with a 11–0 run in the first eight minutes of the second quarter. Defensively, they held the visitors to just two points and increased their lead to a comfortable 21-point margin at the half.

Singapore’s lead allowed head coach Ruth Aitken to rotate her players after the break to include Games debutants Shina Teo and Yasmin Ho.

Aitken said, “Shina, who will get her first cap, was outstanding. Yasmin was a bit nervous when she came on and it’s harder being a shooter, but I thought she did some great stuff too.”

Ho, who took over from Soh as Goal Shooter, got off to a nervy start, as she could not convert several of her attempts. Brunei, on the contrary, enjoyed a better offensive output against the hosts to turn in their highest scoring quarter at eight points.

After a slow start, Ho settled down and had a better output in the fourth quarter. She finished the game with 17 goals.

Together with Goal Attack Chen Huifen, she helped the Singaporeans close out the 50-point victory with a 17–5 final quarter.

“Our warm-ups were a bit rushed so I was really quite nervous when I stepped onto the court for the first five to 10 minutes,” said Yasmin Ho, who earned her second cap in the game.

“Thankfully, my teammates were very steady and they helped me to settle in. In the next quarter, I felt much better and the shots went in after.”

Minister of Culture, Community and Youth Lawrence Wong, who was in attendance, was pleased with the national netball team’s opening victory.

“This is a very good start to our SEA Games campaign and I think netball has given us a strong start.”

He added, “The home crowd is tremendous and that gives our Team Singapore athletes a much added boost and I hope that our Singapore fans will continue to come and support our athletes for the rest of the Games.”

Singapore’s next game is against Thailand on Monday, June 1, 7pm, at the OCBC Arena.