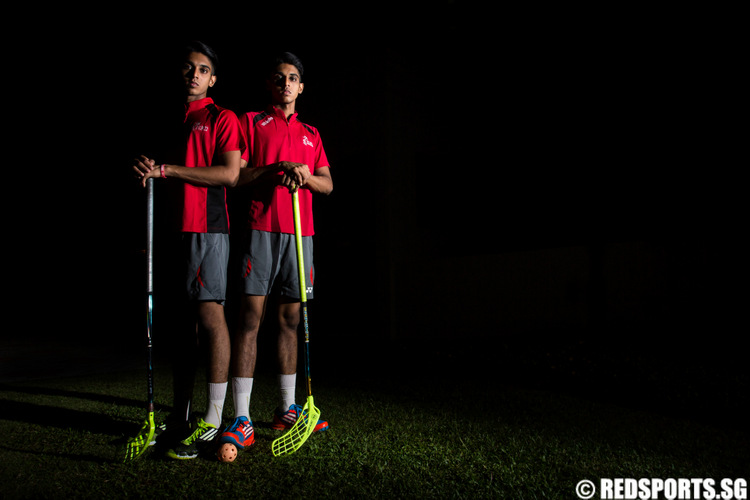 Twins Vignesa (left) and Kumaresa Pasupathy are the youngest members in the national floorball team, which will be playing for a gold at the upcoming 28th SEA Games. (Photo 1 © Lim Yong Teck/Red Sports)

Twins Vignesa and Kumaresa Pasupathy are up and coming names in the local floorball fraternity, and with their natural on-court chemistry and flair for the sport, it was no surprise that the twins made the Singapore national team for the upcoming 28th Southeast Asian (SEA) Games.

The brothers, who just turned 19 in March this year, first picked up the sport nine years ago in Rulang Primary School even though their first preference was football.

“It was probably a blessing in disguise because there was no football in our primary school. Thus we decided to join a new and unique sport that seemed interesting,” said Vignesa, who is the elder of the two.

“What started out as a fun pastime slowly grew into a passion that further developed in secondary school. The fact that it is fast-paced, that we have to constantly react to different situations, as well as the adrenaline we get through winning as a team, made us stick with floorball.”

Separated only by two minutes at birth, it is hard to tell the two apart with their similar build and hairstyle. On court, the only way to distinguish between them is by their jersey numbers, 33 and 34.

“Our first ever floorball jersey numbers were 6 and 7, which are our lucky numbers. From then on, we made sure that our jersey numbers added up to both numbers and we always tried to have it back-to-back,” said Kumaresa.

“Eventually, we wanted to have numbers that signify us so we chose the numbers 33 and 34 and we have been reveling in it ever since.”

Amazing athletes in their own right, the pair led Anglo-Chinese Junior College to a fourth-placed finish in this year’s National A Division Floorball Championship and a silver medal in last year’s edition. They are also members of Skools Innebandy, a powerhouse team in the Singapore Floorball League Men’s Division 1.

Through their consistent performance in the sport, the twins earned themselves call-ups to the national team and have been training with the team since July last year.

“Initially, it was pressurizing because of the high expectations and standards and it was a bit nervy to communicate with the more senior and established players,” said Vignesa.

“However, the seniors guided and treated us in the same light, which helped boost our confidence. In terms of training, they also expect us to be fitter than them, which really pushed us to our limits.”

Kumaresa chimed, “While it can be pressurizing at times, it is an opportunity for us to show that we can match up with the big boys.”

The duo, who are the youngest in the team, will be no strangers to the level of competition in the upcoming Games. They were part of the Singapore team that finished fourth in the 2014 Men’s World Floorball Championships Asia-Oceania Qualification tournament in New Zealand, and won gold at the inaugural Men’s Southeast Asian Floorball Championship 2014, which was held on home soil.

Their sibling rivalry is their biggest motivator on and off the court. Kumaresa said, “It can get rather competitive between the both of us.”

“As long as I feel that my brother can do something, I will tell myself and make sure that I will be able to do it too.”

Vignesa added, “Other than that, our family is our biggest support and motivation.”

With training commitments taking up most of their time, the twins still manage to cope well with their academics through a little secret.

“It helps us stay awake during lessons, and we try to maximize our small pockets of time to do what we need to do and keep afloat in school so we would not have much catching up to do.”

Kumaresa added, “The passion and the desire to get better pushes us to carry on even when it gets tiring.”

“We sacrifice many things as we regard these (academics and floorball) as the two most important things. We are also blessed to have supportive and thoughtful people around us to excel in both areas.”

Floorball first featured in the 27th SEA Games in Nay Pyi Taw, Myanmar, as a demonstration sport with no official medals given out, and Singapore were the victors in both the men’s and women’s competitions.

The sport will make its official debut at this year’s Games and favourites Singapore will be looking to make history by sweeping the first titles in the biennial event.

The 28th SEA Games floorball competition is scheduled on June 11-14 and it will be held at ITE College East.