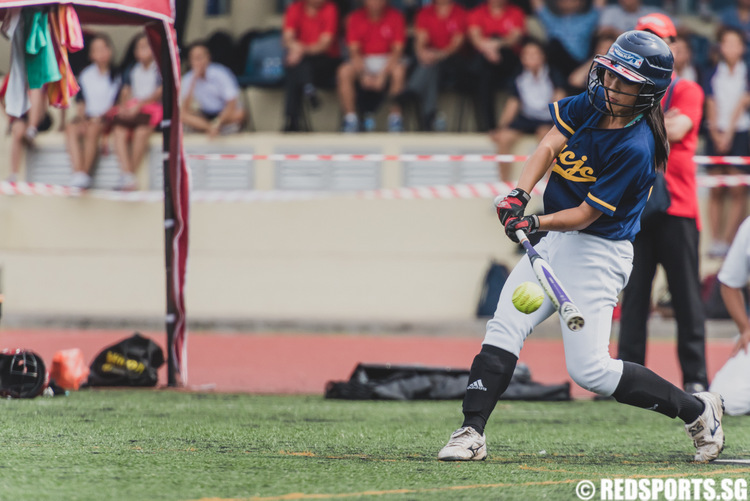 River Valley breezed through the group stage undefeated with a perfect 6–0 win-loss record while ACJC were in second place with a 5–1 record. ACJC’s sole loss was a 1–9 defeat at the hands of RVHS in the season opening game.

Both teams met again in the first game of the playoffs where ACJC beat RVHS 6–5 which seeded ACJC in the final. RVHS went on to beat HCI to qualify for the final.

RVHS gave a walk to the lead off batter to start the game. However the lead off walk did not come back to haunt them as RVHS managed to pick up three consecutive outs to retire the side.

ACJC managed to get two easy outs to start the bottom of the inning but then gave up a ground rule double on a hit by Chai Yi Ann (#2). Despite the hit, ACJC got the last out to leave the RVHS runner stranded on second.

The second inning saw ACJC with a runner on first with one down, but a hit and run failed as it was hit straight to the RVHS second baseman who tossed to first for the double play. ACJC came back in the bottom of the inning to pick up three fast outs to retire the inning.

ACJC failed to score runs on errors by RVHS in the top of the third inning, leaving runners on second and third base. RVHS got a runner on first on a single but then failed to spark an offensive rally as ACJC shut out the next three batters to send both teams into the fourth inning still tied at 0–0.

RVHS picked up a three-up, three-down to start the fourth inning. In the bottom of the fourth, RVHS failed to capitalise on a bases-loaded situation with only one out as ACJC got two easy pop flys to get out of the pinch.

RVHS attempted to make a comeback with a single to start the inning but were soon shut down on a failed bunt which became a double play. With two outs and a runners on first and second, a comeback struck the ACJC pitcher, Wong Rui En (#21) on the wrist, injuring her. With the bases loaded, she came back to pitch for the final out. An RVHS line drive saw ACJC shortstop, Nicole Goh (#74), make a diving catch to end the game and seal the championship title.

ACJC Captain Jolyn Ho (#12) said, “I feel that RV had put up a good fight but we were able to push through and all the training was worth it. When they had the bases loaded, it was quite nerve-wracking but we stayed calm and did what was needed.”

Anthia Yuan (ACJC #24) said of her two-run homer, “It was for the team. I knew my team was behind me, supporting me and that gave me the confidence to hit. The hit is for the team.”

RVHS Captain, Ong Jia Hui (#24) said, “My team put on a good fight and we played well. I am very proud of the team. It’s a pity but there’s always room for improvements.”