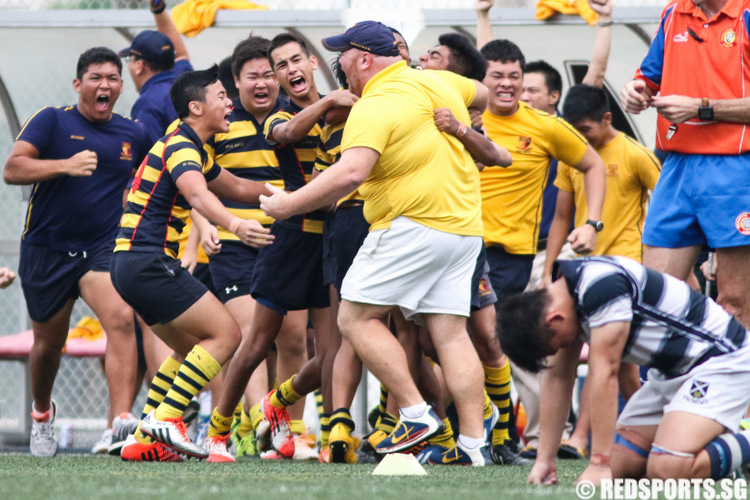 ACS(I) had lost 10–15 to St. Andrew’s in the preliminary round and came into this game as underdogs. They beat ACS (Barker Rd) 56–22 in one semi-final while St. Andrew’s brushed past St. Joseph’s Institution 70–3 in the other.

ACS(I) scored an early try through captain Joshua Lee (#7) before the lightning alert went off to stop play after just 10 minutes. When play resumed within the hour, Saints captain Viviyan Philip kicked a penalty to reduce the deficit to two points at 3–5 before the half-time break.

A succession of penalties in favour of the Saints within the first 10 minutes of the second half saw the ever-reliable Viviyan give a kicking clinic, threading the ball through the goal posts from various distances. A 5–3 lead soon turned into a 5–9 deficit for ACS(I). ACS(I) gave away another penalty and it seemed inevitable that Saints would pull away.

However, Viviyan missed with the wind against him, the ball falling short, and the chance to put his team further ahead was gone.

Those extra three points would prove crucial, because, from that point on, it was all ACS(I).

From hardly crossing the half way line, the blue and yellow ACS(I) tide started rolling into the Saints half and camped there for the rest of the second half. Probing, rucking, mauling, running, the ACS(I) attacks came in waves but the blue and white Saints line always stood firm.

However, as time ticked away, and as ACS(I) came close to a try on two occasions but just could not get the ball over or down, their supporters started going quiet and shook their heads. An air of inevitability hung in the air.

Then came the final play.

Instead of kicking the ball out to touch end the game, St. Andrew’s kept the ball in play, allowing ACS(I) to power their way to within touching distance of the try line. The ball, now lost under a mass of bodies, would occasionally reemerge in the hands of an ACS(I) rugger, only for him to get hammered in a barrage of Saints’ tackles.

Then finally, hurling himself in between the legs of a Saints rugger, Shern Lim got the ball over the try line, triggering relief and ecstasy on the bench and in the stands, while some of the Saints sank into the ground with despair.

“Extremely, extremely relieved. It was just pure joy,” recalled Shern after the game about his game-winning try.

“We were disciplined. We listened to our coaches. What they said at half time echoed in my head, ‘Just keep the ball, keep position, be disciplined, do not be hasty, do not lose your cool’. We went hard, we went low, we did not give in,” he added.

“No words can describe the feeling,” said ACS(I) captain Joshua Lee.”From being down, to scoring that one try, the one that actually matters. The feeling is so overwhelming. A wave of emotions just poured out.”

When asked how it felt to be down 5–9 for long stretches of the second half, Joshua added: “We were definitely feeling down. Conceding nine points just by penalties is a real pain.”

When ACS(I) were announced as champions during the prize presentation ceremony, the St. Andrew’s players broke out in three cheers in an act of remarkable sportsmanship.

Joshua returned the gesture with an acknowledgement of Saints’ prowess on the field of play, especially the kicking ability of Viviyan.

It’s a really good feat from Viviyan. He can kick from almost anywhere on the field. It’s very impressive from him,” said Joshua.

“I felt the boys came out believing they can overturn the results in the preliminary round,” said ACS(I) coach Adrian Chong, referring to their first round defeat to St. Andrew’s. “From the start, they played as one. Everyone was willing to chip in. That was the building block for our victory today, even to the last seconds of the game.

“I think there was a belief. Any team that can hold possession from their own half to the try line, it shows a lot of character. I need to commend the boys for a steely show. I think it was befitting of a final today.

“The boys stuck to the job even though we were trailing. Two botched penalty kicks to the corner, honestly, we thought it wasn’t going to be our day. Credit to the boys, despite the setbacks, they were still willing to chip in and work until they reached the try line. That was a real team effort. I think everybody got a touch to the ball or did something to ensure the ball reached the try line,” added coach Adrian.