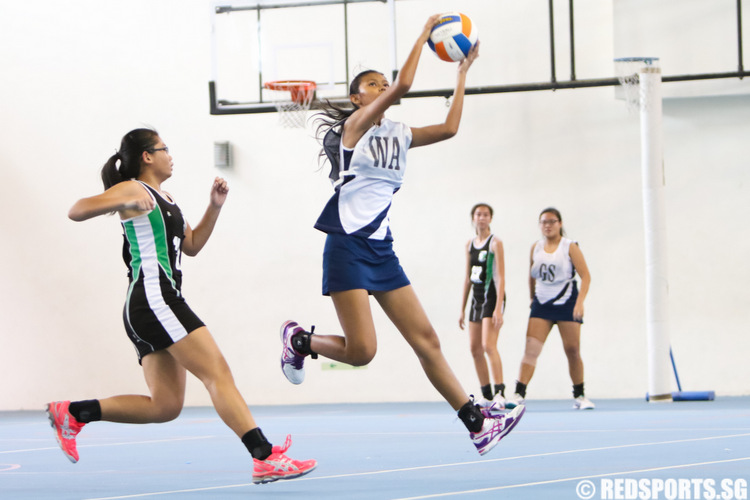 In the first quarter, CHIJ (Toa Payoh) took complete control of the game while Sports School struggled to keep up. Swift and accurate passing from CHIJ to their shooters Rindy Lok (GA) and Tan Yin Yun (GS) saw their team execute a 5–0 scoring run at one point during the game.

A change in line-up by RGS saw captain Angelina Lim moving from the GD to C position. Her presence on court helped boost her team’s offensive play as she worked well with her Wing Attack, Niu Si Wen, to bring the ball down to their shooters. The smaller Raffles shooters had to work extra hard to get around the CHIJ defenders, Alena Rae Ong (GD) and Edna Leong (GK), who managed to intercept several passes and rebounds.

Through several CHIJ (TP) turnovers, RGS were able to convert on offence to score seven goals and trail 12–26 by half time.

The third quarter saw RGS stepping up, giving CHIJ a run for their money. Miki Ng (GK) of Raffles managed to keep CHIJ’s offence at bay with timely interceptions and adept defensive positioning against Yin Yun (GS) of CHIJ.

Despite relentless pressure displayed by the RGS defenders, Yin Yun held the fort in the offensive end for CHIJ as she contributed eight out of the 10 goals scored in this quarter. Both teams added 10 points apiece in this quarter with CHIJ TP leading 36–22 going into the third and final break.

Tricia Koh (GS) of Raffles opened the scoring for her team in the final quarter by potting in two consecutive shots, successfully dodging past her defenders on several occasions. Despite the comfortable lead, the CHIJ players were tenacious in challenging every pass with commendable efforts by Koh Zhi Min (WD).

The aggression put up by the CHIJ defenders paid off as they managed to create turnovers that were converted into points for their team, which resulted in two 4–0 scoring run by Yin Yun.

Although Raffles’ pushed their opponents till the end, it was CHIJ that emerged victorious at the final whistle. CHIJ eventually outscored Raffles 12–7 in the last quarter to take home the 48–29 win.

The 2014 zonals runners-up will play against Singapore Sports School on Tuesday, April 21 at 3.50 p.m.

RGS will meet St. Margaret’s Secondary for the 3rd/4th placing match at 1.20 p.m. Both games will take place at Jurong East Sports Hall.