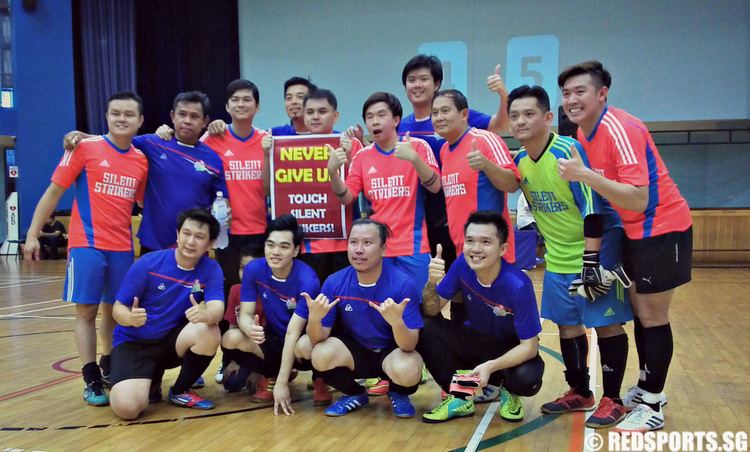 Players of History Makers A (in blue) and Touch Silent Strikers (in red) pose for a photo after the final match. (Photo 1 © Shadiq Al-Hussain/Red Sports)

You never do stop learning, and sport is the greatest teacher of them all. I was reminded of this as I learnt lessons on determination, friendship and community, as I observed the inaugural National Deaf Games’ Futsal tournament, held this March at the Jurong East Sports Hall. The athletes who took centre-stage were not professionals, and some might say they lose out on not being able to communicate with their teammates and coaches. As I have come to learn, on-court communication is a skill these athletes have mastered. Needless to say, their ball skills and tactical nous were also second-to-none.

The tournament, the first of its kind in Singapore, featured Deaf athletes competing in a futsal competition like any other. In fact, it was one that was, perhaps, more competitive and exciting than most others. Eight men’s and three women’s teams competed in the Men’s Open and Women’s Open competitions respectively. The futsal competition is one of three sporting events in the Games, which also included a Bowling Open (on March 15) and a Badminton Championship (on March 21).

It was a display of eye-catching futsal as players, ranging in age from teenagers to men in their 50s, put their best foot forward hoping to be crowned the first-ever champions of the National Deaf Games. Communication between was done through an intricate, and very impressive, array of hand signals and body movements. Likewise, the coaches conveyed their instructions, praise (and at times, displeasure) towards their charges through sign language. That, though, was not the highlight of the day, as the futsal itself was of a top calibre, with speed and skill being the order of the day.

In the Men’s Open, the eight teams were split into two groups of four teams. Following round-robin-style matches, the top two teams from each group would progress to the semi-finals. Group A comprised of History Makers A, Touch Silent Strikers, Momofuku and Gangsta Hustlers while Group B consisted of History Makers B, Tomyum Boys, Ultimate D and Spartans.

This set up a much-anticipated final showdown between History Makers A and Touch Silent Strikers. Both sets of players knew each other well, and the camaraderie between them was evident from the start of the tournament. That, however, did not diminish the competitiveness and hunger in both camps.
This set the stage for an end-to-end final match, which was flagged off by Guest-of-Honour Mr Tharman Shanmugaratnam, Deputy Prime Minister and Mister for Finance. With both teams getting several names on the scoresheet, it was an all-out display of end-to-end futsal. The match ended with Touch Silent Strikers edging past History Makers A, with a final score of 5–4.

The day’s matches were followed by a prize presentation ceremony, with medals presented to the top three teams in the Men’s and Women’s Opens by Mr Shanmugaratnam. It was all smiles as players, coaches, friends and family joined in for photographs and light-hearted banter.

In an interview after the Men’s final match, Alan Wong, the goalkeeper and captain of Touch Silent Strikers, praised the Deaf Sports Association Singapore (DSA) on a well-organised tournament. “I have been playing with the team since 1998, and so we are very happy to win today. This has been very well-organised and a wonderful tournament. We hope DSA can organise such competitions for more sports, other than this futsal, badminton and bowling. But I am very thankful for this start to the 1st National Deaf Games.”

Similarly, Yak Wan Ling, captain of the Women’s Open champions, History Makers Red, was upbeat about the tournament, as well as about what the future may hold for Deaf sport in Singapore. “We just started the team, and look to play in more tournaments in the future. I think that in the future, Deaf sports can be inculcated at a younger age, perhaps when we are still in school. We had plenty of fun today!”

Alan and Wan Ling’s comments also allowed me to realise that the Deaf community is appreciative of avenues to train in sports as well as to compete. It is not a doubt, as I witnessed today, that there is a wealth of talent amongst these athletes.

One player who caught the eye was Eugene Ng, a 23-year-old member of the Tomyum Boys team which finished in fourth place in the Men’s Open. Along with two of his teammates, he recently represented Singapore in the Sukan Orang Pekak Malaysia (SOPMA) Games, in June 2014 in Malacca, Malaysia. In this tournament, our national deaf footballers faced off with teams representing the Malaysian states, and emerged with a very respectable runner-up finish.

When asked about his thoughts, Eugene chimed in, saying, “We appreciate the tournaments organised here by the DSA. It is good training for players who are looking to further compete in the Asia Pacific region, after our 2nd-place finish in the SOPMA Games last year. We also look forward to playing these international tournaments to gain more experience, and interact with more people. We enjoyed toda’s DSA National Deaf Games as it allowed us to improve ourselves, have fun with our friends and raise the profile of deaf sports in Singapore.”

Having spent a day with these athletes and witnessing their determination to overcome obstacles to thoroughly enjoy and excel at sports, I have surely learnt more about these strong-willed individuals, and about sport itself. I wish them the very best, and hope to hear of more success in the coming years.

I would like to record a special word of thanks to Jaffa Mohamed Salleh, the Vice-President of the DSA for his gracious welcome when I volunteered to cover this event. I would also like to express sincere thanks to Ellias Hussain, a member of the Tomyum Boys team, for translating the comments from Alan Wong and Yak Wan Ling (from the sign language) to me.

You may visit http://www.dsa.org.sg/ to learn more about the DSA and upcoming events.