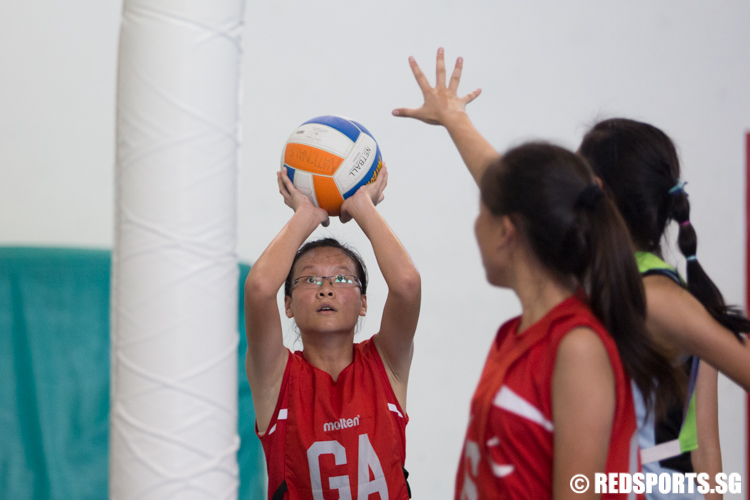 The win gives Anderson a 1–2 win-loss record, as they were previously defeated by CHIJ Toa Payoh (29–39) and Singapore Sports School (31–46). On the other hand, River Valley currently hold a 0–3 win-loss record and are at the bottom of the group. Both teams will not advance to the semi-final.

River Valley took the lead within the first few minutes of the game but Anderson capitalized on River Valley turnovers to end the first quarter trailing 6–7.

The attack of both teams started to suffer from poor shooting spells in the second quarter. As a result, it was a low-scoring affair with just eight goals between the teams. Both teams continued to trade points, playing with high turnover rates. However, Anderson managed to hustle for the one-point lead (11–10) through several offensive rebounds by their shooters.

The third quarter proved to be a tougher fight for River Valley as Anderson stepped up their defence in the goal circle, with Pearly (GD) and Priscillia (GK) effectively pressuring the River Valley shooters. The consistency in Anderson’s game play paid off as they managed to score two goals through Vanessa (GS) in the first few minutes of the game to pull away.

Anderson held on to an 18–14 lead at the end of the third quarter.

The last quarter saw River Valley strive for ball possession. Their fighting spirit paid off as they managed to pressure Anderson in the centre third, then capitalizing on turnovers to score points. However, despite River Valley’s late offensive efforts, a crucial four-point lead from the third quarter allowed Anderson to take home the 23–18 win.

Anderson captain, Sing Fang, said, “We performed better than all our previous games today! I would say that this would be one of the best matches of the season we’ve had so far. I’m very proud of my team for working so hard and giving their all for this last match.”

“To my teammates who will be graduating this year, thank you for being part of this journey with me!” she added.