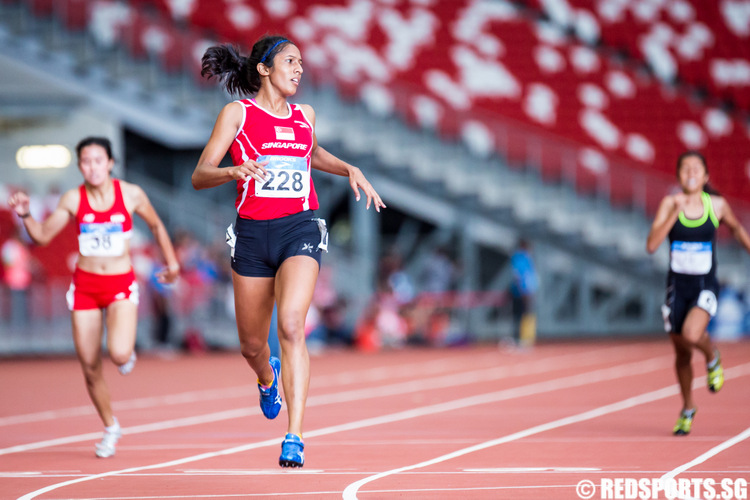 Shanti Veronica Pereira (#228) glances at the clock as she finishes the women’s 200m final on Sunday in a time of 24.00sec, just a hundredth of a second shy of her national record. She had set a new national record in the women’s 100m on the previous day with a time of 11.80sec, shaving 0.09sec off her previous mark set at the World Youth Championships in July 2013. (Photo 1 © Lim Yong Teck/Red Sports)

National Stadium, Saturday and Sunday, 4 and 5 April, 2015 — Three Singapore national records fell on the first of two days of competition at the Singapore Open Track and Field Championships.

The Republic’s undisputed sprint queen, 18-year-old Shanti Veronica Pereira, broke one of those and played a part in a second — in the women’s 4x100m relay — to lead Singapore to a sixth-place finish in the medals tally (with three golds, six silvers, and 16 bronzes).

Held at the National Stadium, the venue was hosting its first track and field meet, a dress rehearsal for the upcoming Southeast Asian (SEA) Games, since it newly opened in June 2014.

Shanti’s new 100m national record improved her previous mark by nine hundredths of a second, set when she became the first Singaporean woman to break 12sec for the distance at the 2013 IAAF World Youth Championships in Ukraine.

It came just over an hour after Ang Chen Xiang had delivered the first of the trio of national records on the first day of the championships, lending credence to claims that the new Mondo Super X track surface made for fast times.

Chen Xiang clocked 14.44sec to better the previous mark set by Abdul Hakeem Abdul Halim at the Taiwan Open in May 2012 by one hundredth of a second.

Returning for the penultimate event of the first day, just over two hours after her 100m final, Shanti ran the second leg in the 4x100m relay for the Singapore ‘A’ team.

Together with Wendy Enn, Eugenia Tan, and Smriti Menon, the team clocked 46.64sec to dip below the previous national record of 46.68sec set by the team of Lee Yan Lin, Ann Siao Mei, Amanda Choo, and Wong Ze Teng at the 2007 SEA Games in Thailand. The quartet finished second of three teams, behind Indonesia (45.98sec).

The Singapore Open was the last chance for Singapore athletes to qualify for the 2015 SEA Games on home soil, as the Singapore National Olympic Council (SNOC) are expected to confirm the final squad by the end of April after nominations are submitted by Singapore Athletics.

The battle for the top two spots (each country is allowed to enter up to two athletes per event in athletics subject to each country’s own qualifying criteria) in certain events was separated by fine margins.

All four clashed on Saturday in the 1,500m final, the conclusion of which saw a shuffle in rankings.

Raviin emerged as the top-ranked Singaporean 1,500m runner after a finishing kick in the last 300m of the race saw him claw back a 20m gap that Hua Qun and Jian Yong had established on him, clocking a personal best 4:01.70 to finish as the top Singaporean and third overall, behind Indonesia’s Ridwan (3:53.11) and Malaysia’s Hamizan Ahmad Luth (3:57.55).

Zachary, however, would find some consolation the next day in the 800m final when he clocked 1:56.25 to finish fourth overall and second Singaporean behind Jian Yong (1:55.64). The 2010 Youth Olympic Games Singapore representative’s time would also rank him as the second-fastest Singaporean in the 800m within the SEA Games qualifying window as athletes await news of the SEA Games squad confirmation.