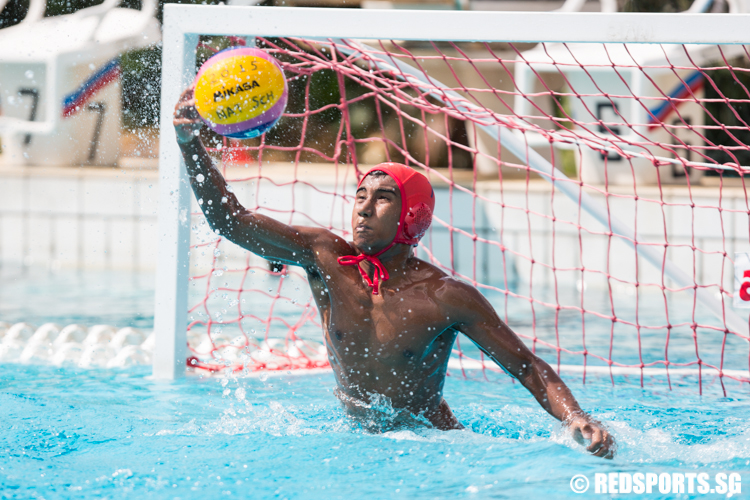 The two teams had earlier faced off at the start of the season and RI claimed a 7–3 victory then. Entering the final, RI remained undefeated while ACJC only suffered that sole loss.

“Both teams were strong. Like what my coach said, whichever team who has the most heart will win. Even though we started slow, we managed to pull back slowly and we played our best towards the end,” said ACJC goalkeeper, Kishan (#1).

He added, “I just did what I had to do and I did not let my team down.” Kishan’s steady performance today allowed him to make composed saves to deny RI any goals in the second half.

RI started the game on a good note, with Benedict Yeo (#8) opening the scoring. Justin Chia (#5) added another goal to the scoreboard shortly after, giving RI a quick 2–0 lead.

Jared Lim (#4) was excluded for misconduct and ACJC took the opportunity to put in their first goal through Glen (#6) to make it 2–1. With five seconds left on the clock, Francis (#2) of RI scored to extend their lead to 3–1 to end the first quarter.

ACJC scored an early goal in the second quarter through Glen (#6) who managed to break through RI’s defense. RI continued their scoring streak in the second quarter, which lifted them to a 5–2 lead. Isa (#2) of ACJC pulled one back and RI led 5–3 going into the half-time break.

After the break, RI scored yet another goal to extend their lead to 6–3. It looked like RI would ease to victory but the defending champions were not done.

ACJC became more focused on their plays and were putting up strong defensive efforts. Their efforts paid off when Eldon (#3) successfully made the shot to reduce the deficit to 6–4.

From that point on, ACJC never looked back.

They returned from the break with renewed confidence. ACJC kept trying for shots and found a goal via Isa (#2) to make it 6–5, which helped boost the team’s morale further.

All hopes were now pinned on an equaliser. RI went full-force on defence in an attempt to keep their lead but Gordon Chen (#7) of ACJC managed to equalise to set the final on edge.

With tensions rising in the spectator stands, Glen (#6) sent the ACJC supporters into raptures when he scored the winning goal for ACJC.

What followed was a nerve-wracking final four minutes. ACJC were trying to hold off RI from scoring any goals while RI were desperately looking for an equalizer in hopes of going into overtime.

A crucial save by Kishan (#6) allowed ACJC to hold on to their lead. ACJC’s composure allowed them to eventually seal their 7–6 victory to defend their championship title.

ACJC’s captain, Isa (#2) said, “I think at the start we were a bit shaky because most of them were playing first time in the finals. Afterwards, I’m really glad we just came together, got their minds straight and played their hearts out in the last quarter which was the turning point of the game.”

He added, “We owe it (our win) to two people. First, our coach, Paul Tan, who never gave up on us throughout the game and kept telling us to stay focused. I think that’s the major factor in the team’s mental performance. Also, our keeper made a string of awesome saves and the entire team got a renewed confidence and we want to strike back harder to make sure we don’t let him down.”

RI’s captain, Shawn Lee (#7), said, “It’s our first final after six years of training. Before this season, our aim was just to get to the final. I’m already very proud of my team for getting to the finals. We’ve been through a lot together and as a captain, I couldn’t ask for more from them.”