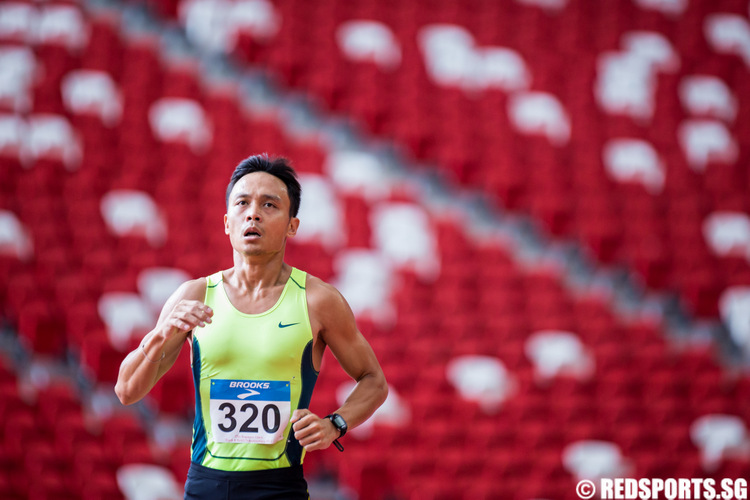 The pair, Cleve Mu and Lynette Tung, were crowned the inaugural King and Queen of 2.4 respectively at the National Stadium.

While Cleve Mu’s winning time was the fastest of the day, it was slower than that clocked at the event trial last September.

Speaking after the race, Cleve said, “I found out about this event last year (when Red Sports conducted the trial). So when it came out again, I couldn’t think too much, just sign up and participate.”

Cleve had declared a personal best of 8:01 when registering for the event, and entered the race with an eye on improving it to 7:45. While he failed to meet his objective, it was not through a lack of motivation.

“You can feel the vibes even if it (the stadium)’s empty. When I walked out of the tunnel (which led the participants from the call room to the track), I felt there was an invisible pressure on me so it motivated me to run better. So, while I was running, I felt that the winds, the atmosphere, the track, the physical and non-physical stuff motivating me as well. Makes me push even harder and harder,” said Cleve, still catching his breath.

While Cleve won the men’s category handily, by just over 12 seconds over the next fastest man, Lynette faced a closer fight in the women’s category — from her Singapore Polytechnic (SP) track and field teammates.

Tang Chin Sing and Ong Li Sha both finished slightly over a second behind Lynette.

“We three are very close. It’s actually quite hard to get girls (to join and stay with the track and field team) so we three always stick together, and our coach always asks us…to help each other in the process. So, we three always finish very close together. It motivates because you always push yourself to be better than the first (runner) and, even though you are the first, you still want to push yourself to be better than your own PB (personal best),” said Lynette, who is into her second year at SP, as Chin Sing and Li Sha similarly are.

Like Cleve, however, Lynette did not meet her target timing.

“It was off my PB (of 9:57) by quite a lot. So it’s still quite a disappointment even though I came in first,” said Lynette.

For almost all participants, it was their first time running on the National Stadium track, surrounded by 55,000 red and white seats.

Lynette said, “It looked like there’s a crowd – that’s what my friend said about the (effect of the) colour(s) of the seats.”

Chin Sing added, “Normally, other races are like outdoors but this one is sort of indoors (referring to the National Stadium’s closed roof). And the (Mondo Super X) track is also different from the normal track that I run on. Everything’s just different.”

Muhammad Sufiyan, who finished first in the second of two men’s finals and third overall, was also impressed by the venue.

Sufiyan said, “It’s an honour to actually be able to run on this track. Some people say that only limited people are actually able to touch this stadium. I’m quite proud that I’m able to touch the stadium.”