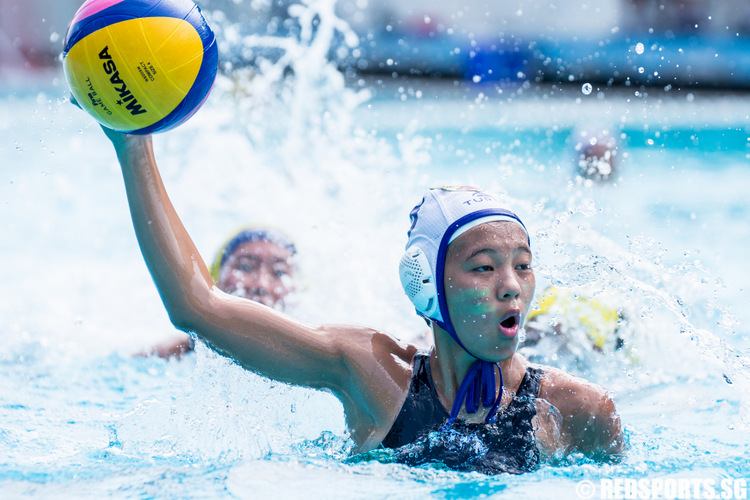 This gives the defending champions their seventh consecutive title.

“I feel super relieved and overwhelmed. I think getting this gold is not easy and it also requires a lot of support from seniors, coach and each other,” said RI captain, Richelle Ang (#8).

“The win really means a lot to us because it signifies a lot of things. More importantly, it’s also the process, like the friendships forged and the relationships that have been strengthened.”

RI head coach, Lim Hao Liang, who has been coaching the school since 2010, said, “I think that the girls did really well because for a lot of them, it’s their first time playing in the final. As seniors, only two of them played last year so basically as a team, everyone is very new.

“So to be able to perform under pressure, I think that that’s the most important thing, because in a big final, you will usually crack under pressure. I think these girls are mentally strong. They came a long way.”

Throughout the game, TJC were unable to penetrate RI’s aggressive defence and Queena Li’s (#5) two goals were due to RI’s defensive mistakes.

Lee (#4) opened the scoring and Ang (#8) added another off a rebound to give RI a quick 2–0 lead. However, a subsequent momentary defensive lapse late in the quarter conceded a goal to TJC’s Li (#5).

RI’s fielders constantly foiled TJC’s strategy of long passes, and Quek (#5) duly converted one of the interceptions to extend RI’s lead to two at the end of the opening quarter.

TJC stepped up their defensive efforts in the second quarter and stood their ground against their stronger opponents. Coupled with exceptional goalkeeping by TJC custodian Emelia Tan (#1), who single-handedly stopped five of six RI attempts, TJC held their opponents to just a single goal in the frame.

However, after the break, a lack of defensive help allowed RI to bolster their lead to six points; most of RI’s goals were off deflections by TJC’s Tan (#1).

In the closing quarter, an emotional Tan (#1) overcame her frustrations and went on to deny ten straight RI attempts, all of which were point blank.

However, her individual efforts were not enough to overcome the deficit, and RI clinched the six-point victory.

“We tried our best and put up a good fight,” said Jenevieve K (#6). “We improved a lot from our first match. It was an accomplishment and we tried our best. Even though we lost, we are proud of what we achieved.”

The TJC captain added, “Emelia (#1) did exceedingly well and blocked a lot of goals. If she wasn’t there, we wouldn’t have done as well.”