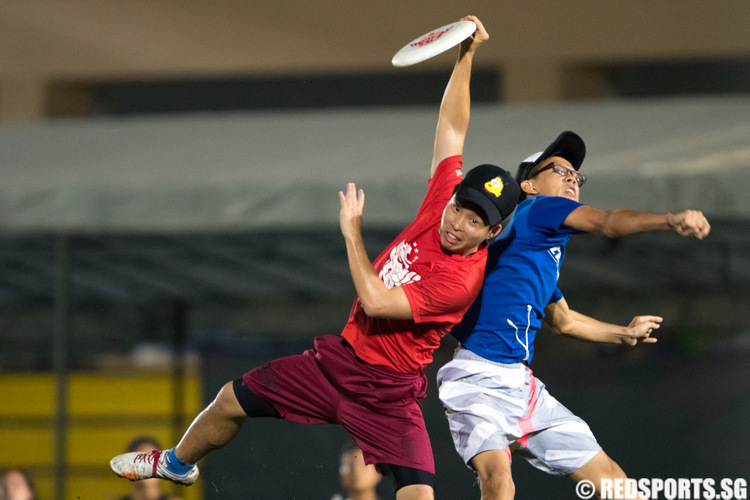 This is NYP’s seventh title.

The Polytechnic-Institute of Technical Education (POL-ITE) champions had earlier met the Singapore University Games (SUniG) third runners-up in the preliminaries and beat them 8–5.

NYP had an easy start and gained two break points quickly to lead 4–2. On the other hand, the underdogs had trouble getting past NYP’s zone defence.

However, it did not take long for NUS to find a solution to NYP’s offence. NUS stepped up their intensity to score two consecutive points and equalised the score.

NYP adjusted and added two easy points. NUS made some great interceptions to lead for the first time (7–6) in the match. Both teams displayed some great hucks that were unstoppable to keep each other on their toes.

A crucial hand block by NYP’s Chang Jun Jie (#3) aided the team to score a break point for a 12–10 lead. NUS then scored an easy point to reduce the deficit. NYP’s Darien (#50) made a fatal mistake in the next point, dropping the disc just five metres away from the end zone. NUS capitalized and scored with ease to level the score.

In the dying point, NYP displayed swift movements to move the disc down the field quickly. NUS could not catch up with their play, allowing NYP to score with ease and seal the victory.

“I am happy with how far this team has come. The team knew that we had the capability to win and we had the desire to do so. We did not start well yesterday. However, we came back strong today when we trusted each other (more). In the final, we fell behind multiple times but we kept coming back,” commented NUS captain Sim Ee Shan.

“This season hasn’t been easy. It is heartening to see my juniors working so hard for the team. I am grateful that my batchmates stick together. It is our three years efforts that got us this title,” said NYP captain and final year student Chang Jun Jie.