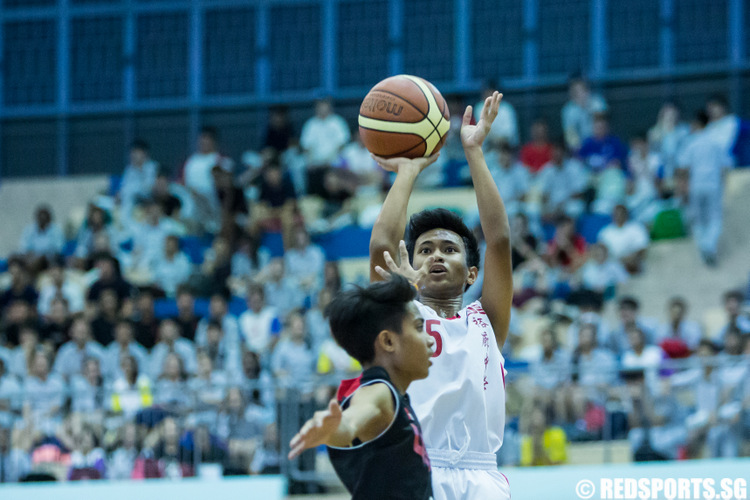 Mohamad Hilman (#5) of Jurong shoots the ball against John Christopher (#7) of Unity during the West Zone final. Both players will look to carry their teams through the Nationals. (Photo 1 © Lim Yong Teck/Red Sports)

With the National B Division Basketball Championship just around the corner, we take a look at some of the teams featured in this year’s contest. With the upsetting and elimination of some big names at the zonal level, new names are stepping up this season.

While undersized in the paint, North Vista pose a threat with their agility and long-ranged shooting, which teams should look out for. Ahmad Ibrahim’s key offensive and defensive strength lies in the paint area in Lakksman Ganapathy, who is one of the biggest and probably the strongest centre in the Nationals.
Both teams have met twice in the zonals; once in the second round and in the final. Each have gone down once to the other.

After failing to qualify for last year’s Nationals, Catholic High are back in contention and climbed the ladder against stiffer competition in the North Zone. They were formerly from the South Zone and were allocated to the North Zone due to a reshuffling of schools across the zones. Teams should look to capitalize on their poor free throw percentage. A new face in the Nationals, Edgefield have a balanced core to make up for a lack of size.

Both Fairfield Methodist and ACS (Barker Road) boast balanced line-ups and key players to look out for would be Fairfield Methodist’s Gavin Tay and Xavier Ng, and ACS’s backcourt duo of Kelvin Frany Feng and Sherman Seet. Both teams have faced each other twice; once in the second round and in the final. The reigning South Zone champions are the victors on both occasions.

Peicai and Queenstown will both make a rare appearance at the Nationals this season with the elimination of Raffles Institution and Queensway Secondary, both of which lost a bulk of their key players due to graduation.

Zonal champions Dunman, who have an all-rounded team that have dominated the East Zone for four years, will be one of the primary teams to look out for this season. Coupled with established bench strength, they pride themselves an average win margin of at least 40 points per game.

Chung Cheng, with a frontcourt duo of Dominick Soh and Jarrett Yip, have fought themselves back into a spot in the Nationals, after missing out for two years. Likewise, Ngee Ann are making their first appearance at the Nationals since 2010. Dunman High, despite losing a few players to graduation, managed to keep their gritty play and maintained their reputation as a top four team in the zone.

Zonal champions Jurong Secondary, just like their East Zone counterparts, boast an all-rounded line-up and a deep bench, while reigning National champions Unity look to retain their title against packed teams, through their one-two backcourt punch of Thng Yong-An and John Christopher. They find themselves in a familiar situation – they lost to Bukit Panjang Government High in the zonal final and eventually beat the latter in the second round of the Nationals last year.

Jurong West and Pioneer will be making their first appearance in a long while, especially with the elimination of long-time powerhouse New Town Secondary and last year’s zonal champions Bukit Panjang. Key players to look out for are forwards Benjamin Ang (Jurong West) and Reece Low (Pioneer), who have both made marked improvements in their games from last year.