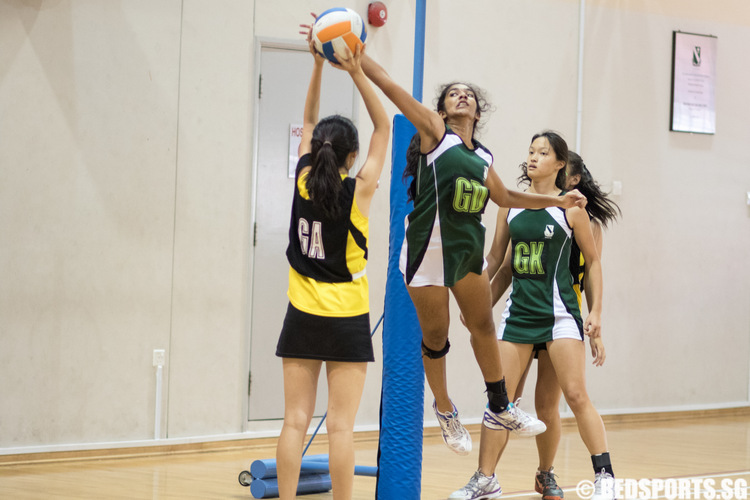 GK of SMS jumps in an attempt to block the shot. (Photo 1 © Clara Yuan/Red Sports)

St. Margaret Secondary School, Thursday, March 5, 2015 — Crescent Girls’ School were in control of the game in the first three quarters. However, St. Margaret’s Secondary put up a spectacular performance in both defence and offence to eventually beat Crescent Girls’ 23–19 to finish third in the South Zone B Division Netball Championship.

St. Margaret’s had also beaten the same opponents by two points when they last met in the first round.

A confident and patient Crescent Girls’ saw them deliver accurate passes to lead 5–4 after the first quarter.

Crescent Girls’ continued their swift movements in the next two quarters. They extended their lead to three points at the end of the third quarter to lead 16–13.

However, St. Margaret’s clawed back the deficit in the final minutes of the third quarter, putting more pressure on Crescent Girls’ attack to create multiple turnovers. St Margaret’s went on a 4–1 run to level the score at 17–all.

They continued with their momentum and set themselves up for more interceptions. On the other hand, fatigue set in for Crescent Girls’. Their legs were getting heavy and the intensity of their play dropped.

St. Margaret’s eventually outscored them 6–2 in the final quarter to take home the bronze medal.

“I am proud of my team. We did well in the second half of the match,” said St. Margaret’s captain, Jane Yu.