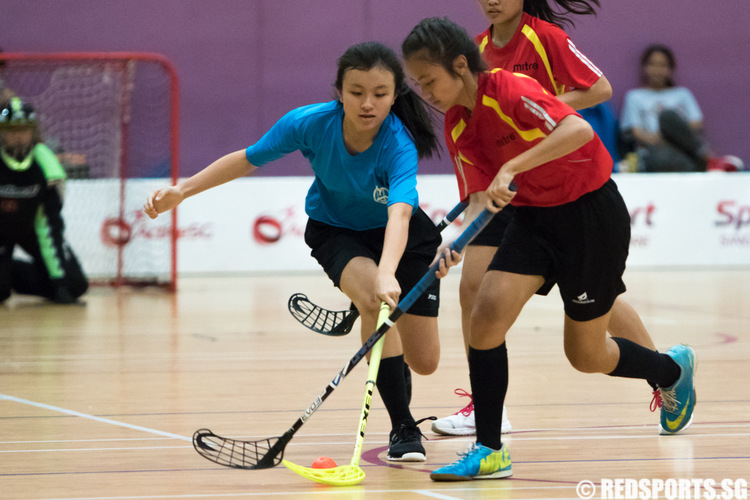 Bukit Merah came out in the first period scoring three goals within the first two minutes of the game. But it was only a glimpse of things to come in the next two periods as they kept piling on the pressure.

It was not long before the next goal for Bukit Merah came. Kent Ridge’s Vanessa Yeo (#4) was pinned by the double team which caused her to lose possession and a swift pass to Bukit Merah’s Berdan Jerylou Concepcion (#21) saw her calmly slotting the ball to the back of the net. The first period ended 9–0 in favour of Bukit Merah.

The remaining periods saw the same story repeat itself as Bukit Merah continued to extend their lead. Kent Ridge showed some spark of life in the second period, as they tried to go on a fast break and take a shot at goal. However, the Bukit Merah defence stopped the fast break attempts before Kent Ridge could get a shot off.

During the last two minutes of the second period, a shot by Berdan Jerylou Concepcion (#21) saw the ball launch towards goal and into a group of Kent Ridge defenders. Unfortunately, the ball was deflected off Vanessa Yeo’s (KR #4) stick, sending the keeper the other way and the ball into an open net. The second period saw Bukit Merah extend their lead to a commanding 15–0.

In the third period, Bukit Merah seemed comfortable with the scoreline and they took time to slowly build up the play and look for more open opportunities. While on their way to their 18th goal of the game, Bukit Merah made a flurry of passes right in front of goal to show their control of the ball before Edelyn Grace (#9) calmly slotted it home into an open goal. The game eventually ended 19–0 with Bukit Merah maintaining their unbeaten record for the season.

Berdan Jerymae Concepcion (#21), captain of Bukit Merah said, “I think we should have done better. We needed more urgency on the ball and more confidence to take our shots. But we would still hope to bring home the championship once again this year.”