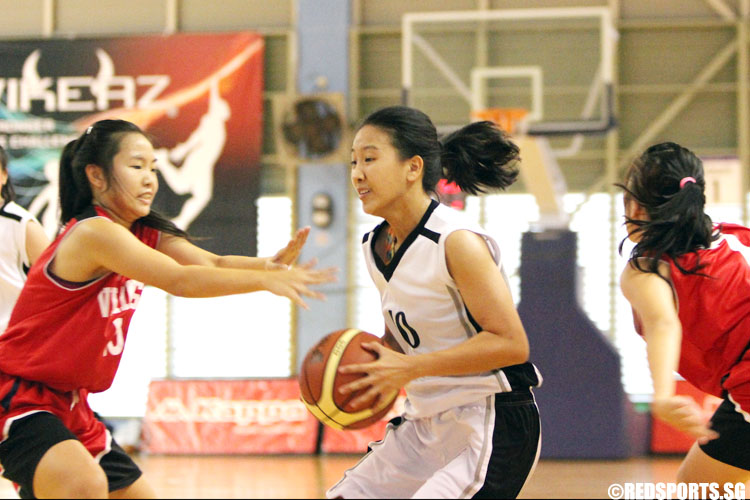 SCGS are the reigning South Zone champions and this is their first year in the North Zone due to a reshuffling of schools across the zones.

It was a close affair in the first quarter as both teams traded baskets. Both teams were jittery in the early part of the quarter as they lost possession easily and were unable to convert their shots. North Vista had four good opportunities but could not hit any of them.

SCGS eventually drew first blood through a free throw. SCGS kept the pressure on North Vista as they applied a full court defensive press early in the quarter to stop North Vista from crossing the half. However, North Vista managed to take a 8–6 lead at the end of the quarter.

But the story was different in the second and third quarter, as SCGS managed to stop many North Vista possessions with their defensive press and made them count by converting on offence. SCGS had mounted an eight-point (21–13) lead by the end of the half. They extended their lead further to 14 points by the end of the third quarter.

It seemed there was no way back into the game for the North Vista girls as they entered the fourth quarter. However, they never gave up as they continued to fight back point by point. They outscored SCGS 12–7 in the quarter, but it was not enough to extinguish the lead that SCGS had built up over the previous two quarters. SCGS clinched the eventual 47–34 victory.

SCGS will face Anderson Secondary, the winner of the other semi-final match, in the final on March 2, 1 p.m. North Vista will play Yishun Town Secondary in the 3rd/4th playoff match on February 27, 1 p.m. Both games will be played at the Singapore Basketball Centre.