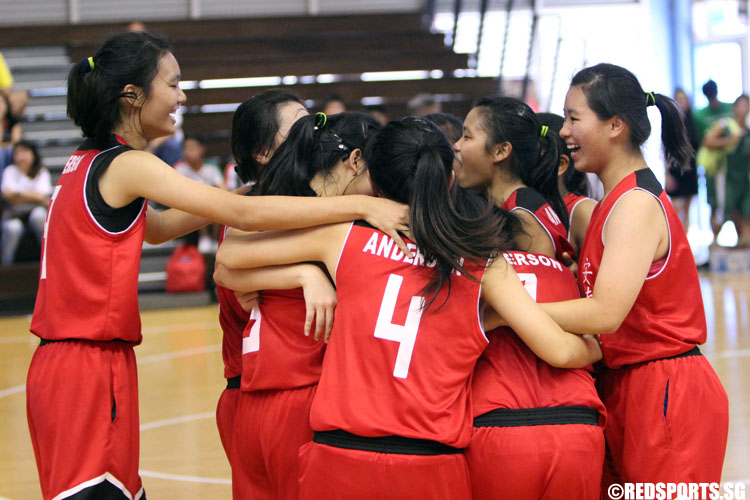 The Anderson girls celebrating the win after the final buzzer went off. (Photo 1 © Joseph Lee/Red Sports)

Singapore Basketball Centre, Wednesday, Feburary 25, 2015 — Anderson Secondary (AND) managed to hold off last year’s runners-up Yishun Town Secondary 45–39 to book themselves a spot in the final of the North Zone B Division Girls’ Basketball Championship.

The game was hard to call at the start with both teams hustling for every ball right from tip-off. Though Anderson took the 8–4 lead at the end of the first quarter, Yishun Town did not back down. They came out refreshed after the break to go on a 9–0 unanswered run to take the 13–8 lead with 4:55 left on the clock.

Anderson called a timeout to regroup, which proved useful as they found their footing in the game and slowly clawed back to reduce the deficit. Choo Jie Ying (#8) proved to be the key for Anderson on both ends as she scored seven out of Anderson’s nine points in that quarter. The half ended with Yishun Town taking a slim one-point (18–17) lead.

Both teams came out of the half-time break hustling for every loose ball and contesting every rebound. Anderson looked to have an upper hand as they took the lead a few times during the quarter.

However, Yishun Town did not let Anderson out of their sights as they kept the score close. Yishun Town maintained their one-point lead over Anderson at the end of the quarter.

After the quarter break, Yishun Town seemed to lose their footing in the game. Anderson ran amok with a 9–2 run to take a five-point (36–31) lead, the biggest of the game so far. Yishun Town tried to fight back as they came back with two consecutive baskets to reduce the deficit to two points (35–37). Anderson responded with six unanswered points to seal the game.

Han Yu Luan (AND #11) said, “It was quite a surprise for us to get into the final as Yishun Town have about the same standard as us. So for us as a team, we are very happy to have reached the final. We have already done our best and will continue doing better in our next game against SCGS.”

Anderson will face Singapore Chinese Girls’ School, the victor or the other semi-final, in the final on March 2, 1 p.m. Yishun Town will play North Vista in the 3rd/4th playoff match on February 27, 1 p.m. Both games will be played at the Singapore Basketball Centre.

Yishun Town Roster
We did not manage to obtain the roster for Yishun Town Secondary. If you happen to know the players, please leave us a comment and we’ll update the post.