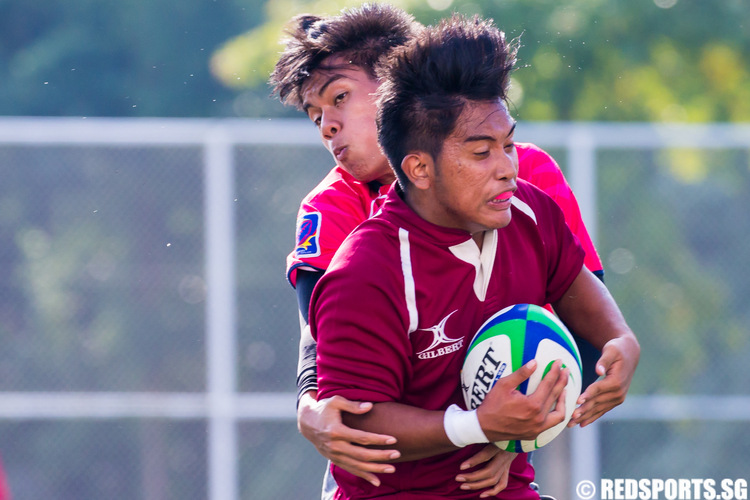 Republic Polytechnic, Tuesday, February 17, 2015 — Damai Secondary shrugged off a disappointing loss to Evergreen Secondary in the previous game, and dominated throughout the game to beat Bukit Batok Secondary 48–0, earning their first victory in the preliminary round of the National B Division Rugby (Bowl) Championship.

Damai captain Muhammad Qamarul (#10) said, “After our first loss (against Evergreen Secondary), the whole team was disappointed. We know that we were going to try harder and there must not be any bad feelings after the loss.”

Damai showed their superiority right from kick-off, scoring try after try to take a 22–0 lead at the end of the first half.

Despite trailing in the game, the undermanned Bukit Batok team kept their heads high and played to their hearts content, as laughters and happy smiles defined their play.

With 10 minutes remaining in the second half, both teams agreed to end the game prematurely, awarding the 48–0 victory to Damai.

Muhammad Qamarul (#10) said, “We stepped up on our game and we really trained our hearts out. This is just the beginning for our journey to the final.”