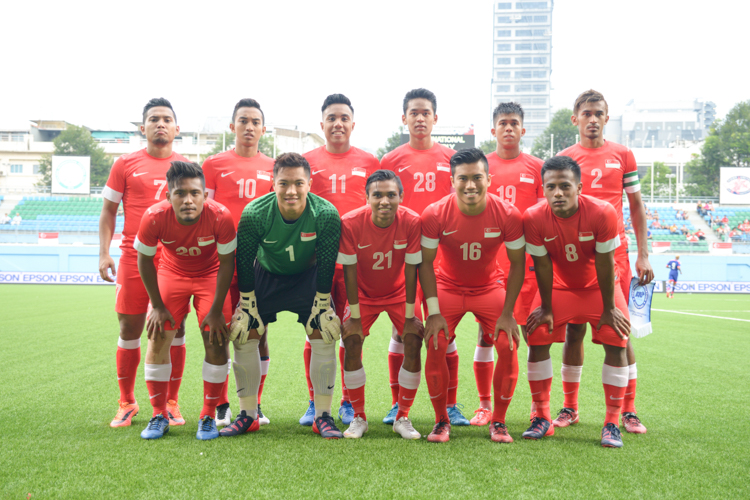 The Singapore U23 football team went down 1–8 at home to the visiting Japanese U22 squad in an international friendly. (Photo courtesy of Football Association of Singapore)

Jalan Besar Stadium, Saturday, February 14, 2015 — The Singapore Under-23 (U23) squad fell to a 1–8 defeat by the Japan Under-22 (U22) squad, who put on a master-class performance at the Jalan Besar Stadium in an international friendly on Saturday evening.

An early brace from Nakajima Shoya set Japan on the way to victory before further goals from Musashi Suzuki, Haruya Ide, Ryota Oshima and Takuma Arano solidified the win.

The U23s came in with a game-plan to utilise the speed of Faris Ramli, Sahil Suhaimi and Shameer Aziq and counter on the break to trouble their visitors.

But it was the Japanese who managed to set the tone of the game, with their movement in the final third causing all sorts of problems for the Singapore side.

The Japanese U22s broke the deadlock in the 10th minute, with Nakajima scoring his first goal of the evening with a brilliant half-volley after right back Ken Matsubara found him with a great diagonal ball.

Nakajima got his second of the night 12 minutes later. This time, he broke the offside trap to meet a neat through ball from Yuta Toyokawa before clinically smashing the ball into the bottom corner past Syazwan Buhari in the Singapore goal.

The Japanese side continued probing, but some solid defending from Amirul Adli and saves from Syazwan prevented the Japan U22s from adding more.

But there was no stopping them and Suzuki was at the right place to slot home a rebound after Masashi Kamekawa’s shot was deflected onto his path.

Coach Aide Iskandar then made a change in hope of turning the tide by bringing on M. Anumanthan for Afiq Noor.

However, Japan U22s then scored two in three minutes before the halftime whistle, with Ide and Oshima joining their teammates on the scoresheet.

Both sides made a couple of changes in the second half, and Singapore looked as though they were capable of matching their Japanese counterparts when play resumed.

But the respite lasted for just 10 minutes, as Arano Takuma made it six from just inside the box, following good work from Nakajima down the left.

Japan then made it seven with 14 minutes left to play through Muroya Sei after some neat interplay with Nakajima.

Singapore pulled a goal back two minutes later through Irfan Fandi. A cross from Safirul Sulaiman found Irfan unmarked, and the striker diverted the ball into the back of the net with goalkeeper Ayumi Niekawa rooted to the spot.

Japan then ended proceedings with another goal seven minutes from time, with Arano scoring his second with a flick past Syazwan.