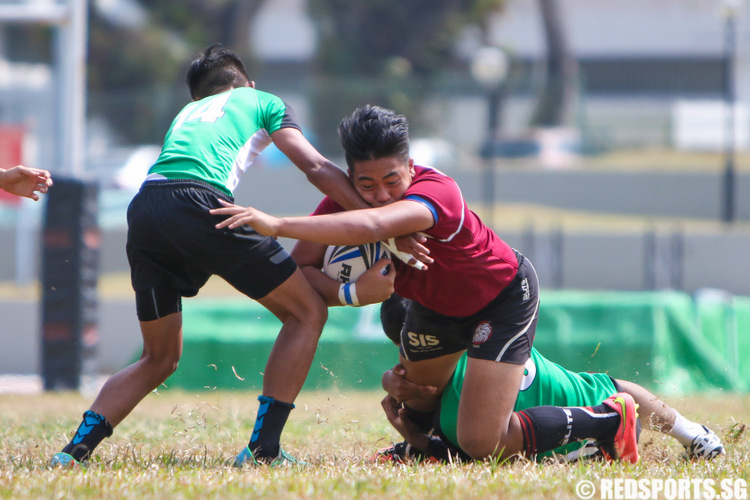 Evergreen constantly threatened Damai’s line of defence early into the game, and kept the ball mostly in their offensive half. Evergreen’s offensive efforts were rewarded when a penalty was given, and Riduan (EVG #10) converted from the halfway line to put the team 3–0 up.

Towards the end of the first half, Evergreen converted another penalty through Riduan (#10) to push their lead to 6–0.

Evergreen started their second half even stronger and scored a try (11–0). Riduan (EVG #10) made his third conversion of the game to make it 13–0.

Damai were 13 points down midway through the second half but they refused to give up. They continued running their offensive plays and their efforts were rewarded when Boo Han Wei (DMS #8) broke through for their first try (5–13).

Han Wei (DMS #8) and Mohamad Irfan (DMS #2) combined well on offense to create scoring opportunities for the team. Han Wei was enjoying a good game in the second half and was strong on his runs, posing a threat to Evergreen’s defenders.

Despite that, Evergreen held on and earned another penalty, which Riduan (EVG #10) converted (16–5).

Damai scored their second try of the game through Muhammad Qamarul (#10) but eventually went down 10–16 to Evergreen in their first game of the season.

Evergreen captain, Faheem (#8), said, “I felt that it was a very tough game as we came in as underdogs. As such I’m really proud of the team for this win. We still have two more games in the group stage so we got to work harder. I think we just need to keep our focus towards the end of the second half.”

Damai captain, Qamarul (#10), said, “It was a great game, as Evergreen is quite a tough team. In Damai’s last two years in the tournament, we didn’t even score a try, so I think we have improved because we didn’t let Evergreen score any tries today, and we scored two ourselves. I think we conceded too many penalties today.”