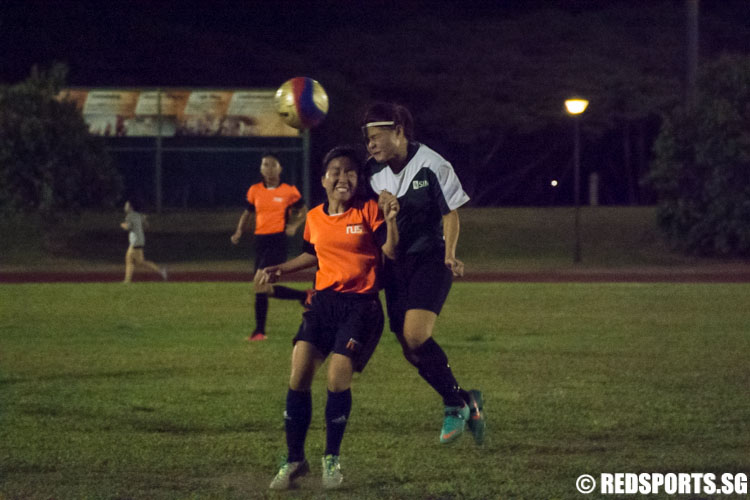 It was a rather even match as both teams continually alternated between short passes and long punts. SIM relied on long punts and slick through passes from players such as Angeline Chua (#7) to create goal opportunities.

On the other hand, NUS attempted to play a game of possession but were repeatedly intercepted by speedy SIM midfielders. As a result, goalkeepers from both sides were relatively untested in the first half.

The game picked up momentum in the second half with NUS quicker to counter-attack.  They were rewarded for their patience with a stunning top left corner goal by Teo Wee Shiuan (#10) after a well-placed through ball from Ong Wei Ting (#9).

Angeline Chua (SIM #7) was the main threat for her team as she sent multiple through balls into NUS’s penalty box. However, the SIM strikers was unable to capitalize on these opportunities for an equalizer. Despite SIM’s best efforts, they were unable to break through the strong NUS defense.

On the other hand, NUS continually sought to add to their lead with displays of good teamwork between their attackers, Teo Wee Shiuan (#10) and Melissa Woon (#23).

When asked about her goal, NUS striker Teo Wee Shiuan stated simply that it was really a lot of teamwork and good play by her teammate, Ong Wei Ting.

With this win, NUS currently top their group that also includes Republic Polytechnic (RP) and the Institute of Technical Education (ITE). The other group match between RP and ITE ended in a 1–1 tie.