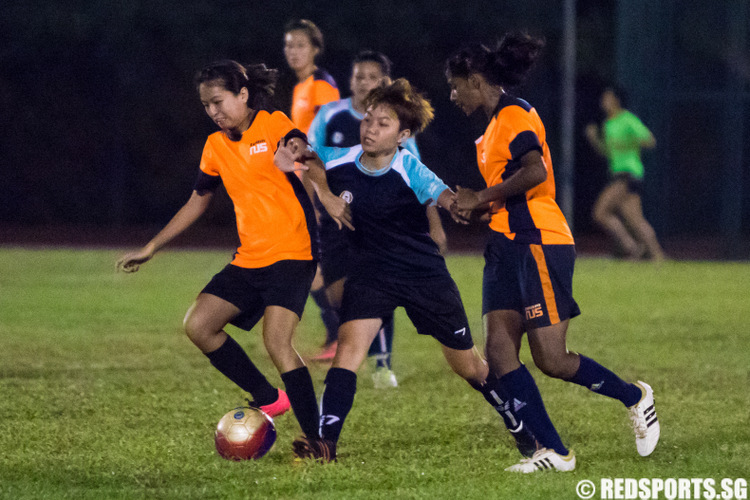 An ITE player attempts to break away from her NUS defenders. (Photo 1 © Clara Yuan/Red Sports)

The SMU UNITEC Soccer Games (SMU-USG) is organised by SMU and it is the largest women’s football tournament for local universities, ITE, Polytechnics and international schools.

The first match of the season began promisingly with rapid exchanges between the ITE attackers and NUS defenders, but ITE were unable to penetrate NUS’s solid defence. Similarly, threats by NUS were swiftly diminished by ITE’s strong defence.

However, ITE conceded many direct free kicks to NUS. A total of eight free kicks were awarded to NUS in the first half. Most of these were taken with confidence by Jessica Ting (NUS #5) and Siti Wan Nabilah (NUS #15) but were cleared away deftly by ITE’s two centre-backs. ITE’s defence line also capitalised effectively on these moments to counter-attack, with many dangerous crosses launched by Hidatasya Zailani (ITE #20).

The second half was more exciting as the match picked up pace with displays of skilful dribbling by Celeste Ang (NUS #14) and Noralinda Wahab (ITE #9). ITE proved to be more opportunistic in the half with more one-on-one direct challenges with the NUS goalkeeper.

Both teams went all-out to the very end of the match, determined to get a goal before the final whistle. Yet, despite their commendable efforts, the match ended in a 0–0 deadlock.

“It was quite a tough match but I think both sides did a good job. It was a challenge but both teams played their best,” said ITE’s captain, Noralinda Wahab (#9). In particular, she commended her goalkeeper, Nur Adilah Johari (#1), for her improving play.

Likewise, Kasfira Hilka Rashid (#17), whom her teammates said was their best player, felt that her team did their best though there is always room for improvement.