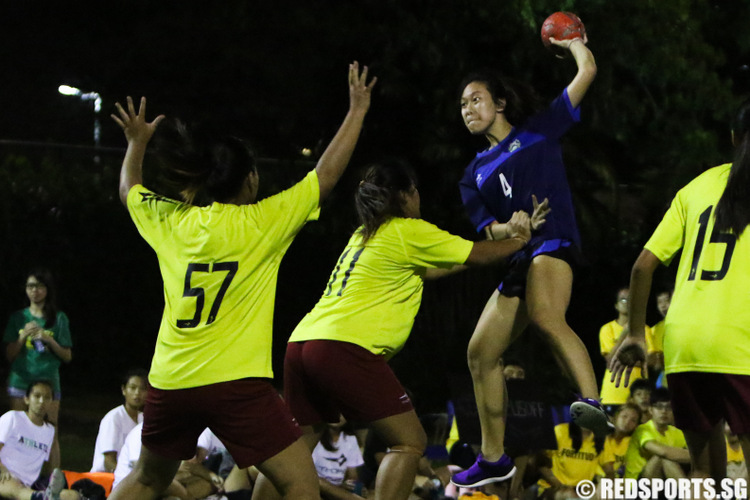 Kent Ridge had previously defeated Temasek Hall 9–7, while Eusoff went down 3–10 to the latter. Eusoff needed a six-point victory to qualify for the semi-final but were not able to secure it.

Lim Shuen (#4) and Steffi Lim (#5) led Kent Ridge with two goals each. Eusoff’s Rachel Ho (#8) had a game-high four goals in the contest, with three in the first half alone. Eusoff custodian Carren Teo (#33) had a sterling defensive effort, including four saves in under two minutes of play in the first half.

Both teams commenced their attack cautiously, swinging the ball around the 9m line. Rachel Ho (#8) scored the first goal for Eusoff from just outside the 6m line. Along with Sharleen Chin (#11), the pair followed with two first wave attacks to increase Eusoff’s lead to 3–0, forcing a Kent Ridge timeout.

Two-minute suspensions issued to Steffi Lim (#5) and Claudia (#16) did not help Kent Ridge’s cause as Eusoff took advantage of the situation to extend their lead to 6–3 at the end of the half.

Eusoff continued their offensive onslaught early in the second half, scoring three goals from the right wing to establish a six-point lead. Clara Chua’s (#31) clutch defensive efforts helped Kent Ridge stop the bleeding, as she found Steffi Lim (#5) for the successful fast break.

After Kent Ridge’s goal, Eusoff had no answer for Kent Ridge’s defensive plays, as they could not convert several attempts. In the closing seconds of the game, Lim Shuen (#4) converted a penalty to secure Kent Ridge’s semi-final berth.

Kent Ridge captain, Lim Shuen (#4) said, “We were quite anxious when they (Eusoff) took the early lead. Everyone was in a panicky state and were not performing their best. The timeout helped us come back in form.”

“I think our defence was good, but our offence could have been better. The ball was stationary and we could have moved the ball better. It was a very good game, and I have faith in my team,” added Lim.