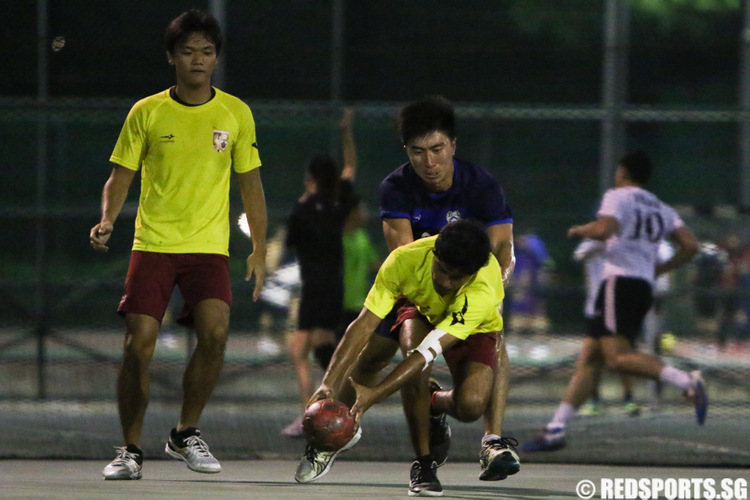 Eugene Ho (#9) led Kent Ridge with five goals, while Eusoff’s Arun Kumar (#3) dominated with a game-high nine. He scored five in the first half alone.

Sheares Hall had previously defeated Kent Ridge 11–8, and Eusoff 10–8, to top their group in the preliminaries. After their losses to Sheares, both Kent Ridge and Eusoff had to secure a win in their matchup against each other to qualify for the semi-finals.

Kent Ridge started out with a strong offensive game, with Eugene (KR #9) taking the first shot moments into the game. On the next transition, Yam Kaisven (KR #7) tried for a wing shot but it was saved by Eusoff goalkeeper Ravi Kumar.

Eusoff Hall had a slow start to their offense, but after repeated tries on goal by Arun (#3) and Ho Yong Cheng (#10), Teoh Zhi Hao (#69) converted an offensive rebound to reduce the deficit to 1–2.

With Zhi Hao’s goal, Eusoff steadied themselves thereafter during attacks, and pivot Justin Nadar (#35) stepped up his game to score one despite his defender’s strong clamp. Teoh Zhi Hao (#69) continued to make a huge difference to Eusoff’s offensive game with his timely rebounds.

Midway through the game, Ho Zheng Yong (EH #99) tried for a shot but it was blocked by goalkeeper Joey Tay (KR #1). However, Zhi Hao (EH #69) took the offensive rebound and converted it to reduce the deficit to one (3–4).

Arun (EH #3) then put one into the back of the net to level with Kent Ridge (4–4). Thereafter, Lee Jinjia (EH #8) broke away from his defender’s clamp to score a goal, giving Eusoff their first lead of the game at 5–4.

Then on, both sides alternated scoring with Eusoff still holding on to their one-point lead. Despite Arun’s scoring streak in the first half, Kent Ridge eventually managed to tie the game at 9–9 by halftime with their high conversion rate, scoring mostly through Eugene (#9) and Jimson (#91), who had three goals each in the first half.

The second half commenced with both halls fighting for the lead, trading goals. They brought the tie to 10–10, 11–11, then 12–12, but things changed thereafter.

Kent Ridge’s Kaisven (#7) converted a penalty shot to give his team a 13–12 lead. Thereafter, Joseph Lim (KR #26) received his second yellow card of the game to receive a 2-minute penalty. Despite being one man down, Kent Ridge defended aggressively while going for consecutive steals to extend their lead to three goals (15–12).

On the other hand, Eusoff had a couple of scoring opportunities but were plagued by shooting woes, failing to convert most of their shots. Eusoff eventually went down 15–20 to Kent Ridge to miss out on the semi-finals.

Kent Ridge captain, Vishnu (#28), said, “Traditionally, Kent Ridge are slow at the start so we wanted to start strong early into the game. Even though we were trailing midway through the first half, it didn’t matter to us, because we knew we could catch up.”

Kent Ridge’s co-captain, Samuel (#22), added, “The first four goals at the start especially, they really gave us a cushion in the later part of the game.”

On what they thought was key to the win, Vishnu said, “I think we worked as team. Even though we have a few really good players, we still made it a point for team effort.”