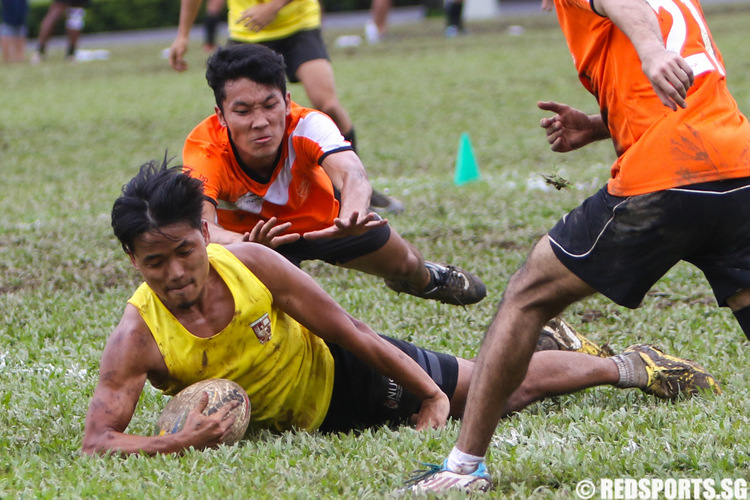 The IHG is a yearly event in NUS, where the six different halls come together to compete against each other in sports. The Touch Rugby tournament is played in a day with a round-robin format. One game consists of two halves of 10 minutes each with a 5-minute halftime break.

In the opening game of the IHG, Temasek Hall (TH) posted a convincing 3–0 win over King Edward VII (KE). Temasek put up a diligent defence, earning turnovers one after another by effecting six touches before KE could reach the goal line. Andy Phua (TH #24) scored the first try minutes into the game, and Najib Indra (TH #77) kept the pace of the game going with another try (2–0). In the second half, KE were still unable to go past Temasek’s defence and went down 0–3.

On the other field, Kent Ridge (KR) overcame Sheares (SH) 3–1 to mark their first win of the tournament.

Going into the lunch break, Kent Ridge led the table with three straight wins, while Temasek registered a 2–1 win-loss record. Temasek’s vice-captain, Onn Zong Xian (#19), said, “We did well so far, I guess. However, the second game didn’t go our way.”

On the other hand, Eusoff (EH), having played only two games, trailed Kent Ridge and Temasek with two wins. Eusoff’s captain, Ng You Hao (#1), felt that the team performed up to expectations. “The team played quite well today. However, I think there’s always room for improvement, so we can still play better. I think that we could further improve on our composure. For the following games, I also hope that everyone will know their roles well.”

Thereafter, after a win against Sheares, Eusoff were looking for a fourth consecutive win in the game against Kent Ridge. However, Kent Ridge refused to budge and touched down to score the first try. Eusoff eventually managed to level with their opponents and held on to force a draw (1–1).

Kent Ridge went on to thrash Raffles 7–0 to secure their IHG championship title. Kent Ridge’s captain, Eugene Ho (#9), commented, “I think we started slow, but improved game after game. We definitely still have a lot of room for improvement, but the games weren’t too bad. I think Eusoff are our toughest opponents.”

In the last game of the tournament, Eusoff were up against Temasek as they fought it out for runners-up. Both halls seemed to be evenly-matched but Eusoff eventually slipped to a 1–2 loss and had to settle for third.