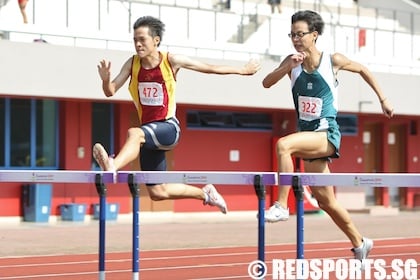 Calvin Quek (left) of Victoria School and Raymond Lee (right) of SJI on their way to finishing 1-2. Both broke the championship record in a close finish. (Photo 1 © Les Tan/Red Sports)

Raymond and Calvin finished 1-2 and were far and away the fastest two runners in the field of eight finalists. The Victoria School student led for most of the race, but a clipped 10th and final hurdle put him slightly on the backfoot, as Raymond surged ahead to the finish line.

Calvin did not concede defeat and worked tooth and nail to draw level with Raymond as they approached the finish. The pair dipped at the line and fell to the ground simultaneously, no doubt spent by the exertions of a race that went right down to the wire.

Raymond won the gold medal in a record time of 55.04 seconds, just a hundredth of a second ahead of Calvin, as they mowed down the previous championship marks of 56.3 (hand-timed), set by Lin Guoxiong in 1987, and 56.48 (electronically-timed), set by Timothee Yap two years ago.

Their personal bests were also left in the dust. Raymond’s previous best was 57.01, while Calvin’s PB stood at 57.30. Both were set during the Singapore Junior Athletic Championships in March 2012.

The next record standing in their way for these 0.840m-high hurdles is the National Youth record of 54.55, set by Timothee at the World Youth Championships last July.

Calvin became the first 400m hurdles runner in National Schools’ history to finish in the top three positions in his first four years at the Championships. He was second in 2009, first in 2010 and third last year. Calvin also became the first runner to win four consecutive medals in this event since Sharman Dustageer from 2003 to 2006.