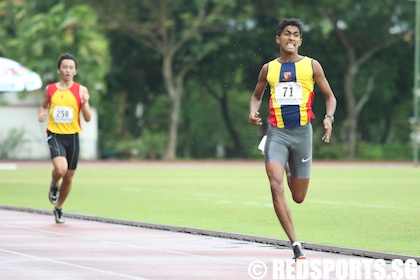 Choa Chu Kang Stadium, Wednesday, April 4, 2012 — Zachary Devaraj of Anglo-Chinese School (Independent) came home first in a time of 1 minute 58.69 seconds to win the A Division 800m final. He was the only athlete to go under two minutes in the race.

It was a much closer 800m race this year than last. In 2011, Zachary won the race by at least 60m but this year, Freeman kept pace with Zachary. Zachary managed to pull away slightly in the final stretch to finish just over two seconds ahead.

ACS(I) and HCI both had three runners each who finished in the top eight.