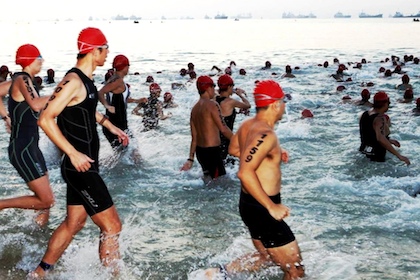 Biathletes heading into the water at an earlier edition of the Singapore Biathlon. (Photo courtesy of SAFRA)

The Singapore Biathlon, scheduled for Saturday, March 3rd, is just weeks away and participants of the Open and Master categories are gearing up to challenge their speed and endurance in a 1.5km swim followed by a 10km run.

Jointly organised by SAFRA and the Republic of Singapore Navy since 2001, the event remains the largest of its kind in Southeast Asia with more than 2,000 participants each year.

For those new to the sport, we bring you a series of helpful tips to support you in your training and hopefully give you an extra edge on race day. Today, we look at open water swimming.

Prepare Yourself Mentally
Swimming in the open water is not the same as training in the swimming pool. In the open water, you will be swimming in the midst of waves and sometimes against the current and wind chop. The water is much deeper and visibility is sometimes close to zero. As you go farther out to sea, you may also feel the occasional sting of jellyfish and seaweed sliding past your body.

It is thus not uncommon for those attempting an open water swim for the very first time to panic due to these factors alone. However, during a race, there will also be hundreds of swimmers clawing their way forward in close proximity to you. This may lead to heightened feelings of claustrophobia and disorientation which can throw you off balance during the race as your heart pounds away and you forget to control your breathing and stokes.

It is thus crucial for newbies to familiarise themselves to these different conditions and prepare themselves both mentally and physically before race day. Know that even seasoned swimmers will feel some anxiety in open water, but the key is to stay calm and focus on your breathing technique and strokes during the race. And if you do panic, you can pause or flip over onto your back for a few seconds, and take a few deep breaths to recompose yourself.

Train Your Sighting
Swimming fast in the water is not going to win the race for you if you are swimming in the wrong direction or in a larger loop due to poor sighting. Sighting is the practice of lifting your eyes out of the water intermittently to see where you are going. This will help you keep on the shortest course possible.

While you are turning your head to breathe, simply lift your eyes and look forward. Do not lift your head too high out of the water as this will cause your hips to drop. Having your eyes just above the water line is sufficient for you to do sighting.

During the race, the most optimal head position for speed is when you are looking straight down as this creates a more streamlined and efficient body position. Hence, the more you lift your head to look, the more tired you will become. But the less you look, the higher the chances of swimming off-course. You will thus need to find the most ideal trade-off. For a start, one way is to count your stokes and do your sighting every 20 to 30 strokes to see if you are swimming in the right direction.

As there are many other swimmers around you on race day, you will not always have a clear view of the buoys marking the turning points. As such, it is helpful to pick a large object in the distance, such as a stationary ship, which is in the direction you need to swim just before the race. Such objects are much easier to spot during the short time you have for sighting.

During your training before the race, you can also train your sighting in the swimming pool by swimming 10 strokes with your eyes closed before lifting your eyes above the water to sight. This will not only help you learn to swim straight without using the bottom of the pool as a guide, it will also help you adapt to the feeling of swimming ‘blind’ under water.

Take Advantage of Drafting
Drafting a faster and physically larger swimmer can really increase your speed. Tailing directly behind another swimmer will make the water smoother, but the most efficient position to draft is alongside the lead swimmer but slightly behind between the ankles and hips. This allows the drafting swimmer to surf the bow wave. The most efficient drafting is when you cruise at the same speed so this will require you to speed up when they speed up, and slow down when they slow down, so that you do not drift back to the swirls and eddies caused by their kicks.