Is the Singapore vs Malaysia excitement a taste of Malaysia Cup again? 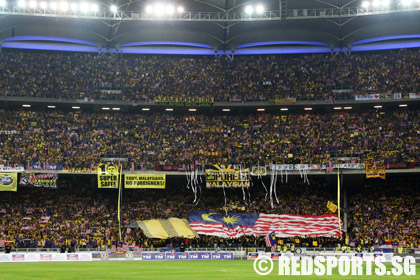 Singapore beat Malaysia 6-4 on aggregate last night in Bukit Jalil Stadium to go through to the third round of the 2014 World Cup qualifiers. While we await the draw to decide who we will play in the third round, the more immediate question is: Does this foreshadow what returning to the Malaysia Cup will be like?

That surely must be on the mind of every football fan and anyone involved in the football industry here in Singapore.

A generation of Singaporeans born after 1990 will have no idea what the Malaysia Cup is about. Their football world is filled with the names of Manchester, Liverpool, Arsenal, Barcelona and Real Madrid. The Malaysia Cup generation grew up with Selangor, Negri Sembilan, Kelantan, Kedah and Perak.

Football thrives on tribal loyalties and nothing in our part of the world has come close to replicating the rivalry of the Malaysia Cup. The ASEAN Football Championship — formerly the Tiger Cup, now the Suzuki Cup — gave everyone a taste of it, but it is played only once every two years. The S.League, after 16 years, cannot even match the rivalry of school football.

The English Premier League (EPL) has, in the meantime, taken firm root in the hearts and minds of football fans in the last decade. When the EPL went exclusively onto cable television in 2001, fans were given an ever-expanding diet of EPL to the point that they can can now watch every single EPL game on cable. (Assuming you even have time to watch all of them.)

So going back to the Malaysia Cup may not be a sure thing but the reaction of fans over the last two Singapore vs Malaysia games will give some hope to football administrators.

After all, with a moribund S.League, the only way to go is up.