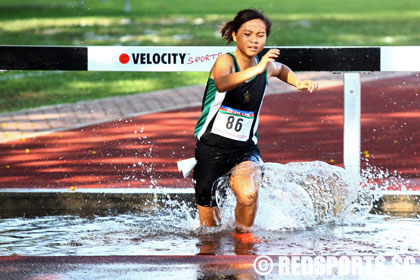 Choa Chu Kang, Tuesday, April 19, 2011 — Wan Zahrah Bte Ahmad Alif Lim of Raffles Institution took gold in the inaugural A Division Girls’ 2000m steeplechase event at the 52nd National Inter-School Track and Field Championships. She came in with a time of 8 minutes 6.58 seconds, to pip team mate Seow Yun Yun to the gold by over 12 seconds.

Victoria JC seemed like the stronger runners right from the start as runners Clara Wong and Romaine Soh ran off to lead the race right from the start. Romaine subsequently pulled off to lead by a distance in the second lap with Clara and Wan Zahrah close behind. As the race entered the third lap, Wan Zahrah closed in onto Romaine. A bad landing by Romaine at the water obstacle saw a wound on her knee open up, with Wan Zahrah taking the lead as Romaine paused to collect herself.

Wan Zahrah held on to her lead as the rest of the runners pursued. As fatigued slowly started creeping in, Seow Yun Yun, who had been lurking behind the leading runners, made her move and overtook both VJC runners to climb to second place. Wan Zahrah however, managed to hold on to her lead for the next lap, and went on to finish the race in first place. Yun Yun also managed to stay in second place, and finished with a time of 8 minutes 19.25 seconds.

Romaine subsequently came in with a time of 8 minutes 28.29 seconds to finish third while team mate Clara came in ten seconds later to finish fourth. 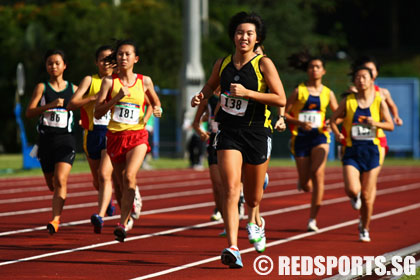 Clara Wong of VJC leading the start of the race as the runners head towards the first hurdle. (Photo 2 © Lai Jun Wei/Red Sports)