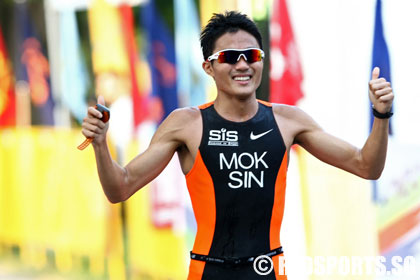 Defending Men’s Open champion Mok Ying Ren finishes his race in 56:54 but had to settle for second this year behind Dylan McNeice (54:20). He was the first male runner to cross the finish line but the timing of Dylan McNeice in a later wave proved faster. (Photo 1 © Lai Jun Wei/Red Sports)

Said the champion, who hails from Christchurch: “I was a little disappointed that I was in a different wave (from the front-runners), but I knew that Mok was doing a lot of running and wasn’t swimming as fast so I knew that if I swam good then I’d be able to hold out in the run.”

“I’ve been running a lot this year but have not swum for a month. I came out of my (pool) training with a timing of 25 minutes (for 1.5km), which was actually not that good,” reflected Ying Ren. “But in the race itself, my swim was quite fast as I finished after about 21 minutes, so I managed to catch up with the leader at about 2 kilometres (into the run).”

In the Women’s Open, Singapore’s Sumiko Tan came within a fraction of overhauling eventual winner and defending champion Trudy Fawcett.

“I’m really amazed actually. I had a much better swim than expected even though I was 3 minutes slower than last year, but (the win) was all down to all the effort I had put in for the event,” commented Trudy on her strong finish.

“The sea was calm, and I think the swim was very good even though I got a bit lost because I was following the wrong feet!” joked Trudy.

“Before the race I knew Trudy and Sumiko were going to be a tough one on the run segment so I planned to get an advantage in the swim,” said Clara. “Even though I had a nice gap in the first run loop (around 1:15 mins), Trudy managed to catch me in the last 2km, and Sumiko manged to catch up in the last km. They are very good at the finishing sprint so I couldn’t catch up. I guess I underestimated them!”

Said Colonel (COL) Tan Tai Tiong, Chairman of the Organising Committee for the 2011 edition: “The Singapore Biathlon has certainly grown and evolved throughout the years to become an established event in the local sports scene.”

“We hope the event can continue to attract more young participants as they use the Singapore Biathlon as a platform to become more conditioned as they challenge themselves to take on a full triathlon in the future.”

Jointly organised by SAFRA and the Republic of Singapore Navy (RSN), the annual event also attracted a total of 108 participants aged 15 to 20 years old, marking an over 45 percent increase in the number of youth participants this year.