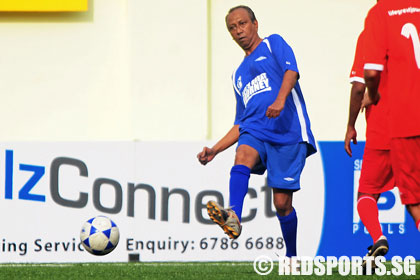 Dollah, affectionately known as the “Gelek King” for his brilliant dribbling skills, fell into a coma after he suffered a heart attack on October 4th, 2009, after coming off in a friendly veterans game between Singapore and Selangor at the Jalan Besar Stadium.

Dollah was part of the magical team that won the 1977 Malaysia Cup after beating Penang 3-2 in the final. He is also fondly remembered for the audacious goal he scored in the 2-0 defeat of Pahang during the 1975 Malaysia Cup at the National Stadium. Test your luck at dolphins pearl online spielen. Dollah dribbled past three opponents from the halfway line, made the goalkeeper dive the wrong way, then cheekily backheeled the ball into goal.

Dollah always had a ready smile and was unassuming even though I was star-struck when I first saw him in the flesh.

Thank you, Dollah, for bringing us together as a young nation back in the 1970s during the Malaysia Cup days. You gave us an early sense of what being a Singaporean meant as 60,000 of us cheered from the stands at the National Stadium.

May you rest in peace.