Singapore, August 14-28, 2010 — Our Red Sports photographers saw a lot of the Youth Olympic Games action through their viewfinder as they told the story with their cameras. Here are some of the favourite images of our Red Crew shooters from the Games. Swimmer Rainer Ng during the 100m butterfly heat. The youngster came in last in his heat but stormed back a few days later to play a part in the 4x100m freestyle relay, in which Singapore came in seventh. More importantly, he also clinched the silver in the 50m backstroke final. (Photo 1 © Tan Jon Han/Red Sports) The reaction of Singapore fans, after Ammirul (foreground, red) scores the fourth goal in their 4-1 win over Montenegro, says it all. The young Cubs brought together the country in a way no other team could at the Youth Olympics. (Photo 2 © Les Tan/Red Sports) If things go well, this will not be the last time we will see Isabelle Li play before the famous five rings. The 16-year-old has her sights set on the 2016 Olympics. To get there, it will take more of the discipline and perseverance she showed in winning the singles silver medal at the Youth Olympics. (Photo 3 © Les Tan/Red Sports) Huang Chao surprised many when he beat the number two seed, Bhamidipati Sai Praneeth of India. The Singaporean then went on to win his next two matches before his Youth Olympic outing came to an end in the quarter-finals, where he went down 1-2 to Malaysia’s Loh Wei Sheng. (Photo 4 © Tan Jon Han/Red Sports) 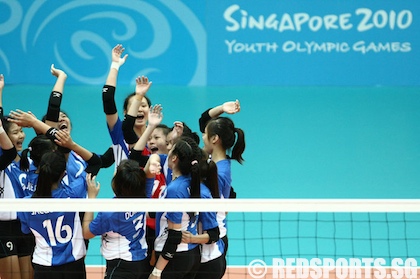 Singapore were unranked and few expected much from a newly-formed team. Having lost to Peru and Japan in their earlier matches, the girls managed to grab one set off the Egyptians in the 5/6th placing classification match. Despite losing the match eventually, many will remember them for their small achievement of taking the first set. (Photo 5 © Lai Jun Wei/Red Sports) Samudra Ong of Singapore still looks cool and calm in the middle of frantic activity within the D. Singapore went down 1-7 to Belgium in this game but managed to finish their Youth Olympics on a winning note when they beat Chile 6-1 to finish fifth out of six teams. (Photo 6 © Low Sze Sen/Red Sports) The image of Darren Choy crossing the reflection pool to light the cauldron during the opening ceremony will be one of the lasting images from the Youth Olympic Games. (Photo 7 © Vanessa Lim/Red Sports)

For more photos, go to the next page