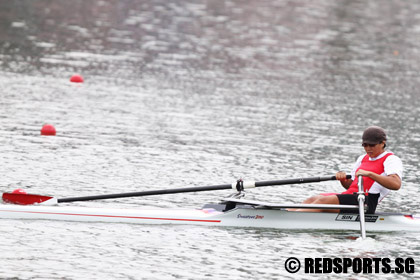 Singapore’s Joanna Chan finished fourth in her heat and could not qualify directly for the semi-finals. She will get another chance in the repechage on Monday. (Photo 1 © Marvin Lowe/Red Sports)

Marina Reservoir, Sunday, August 15, 2010 — It was a day of mixed fortunes for the Singaporean rowing pair of Joanna Chan and Nadzrie Hyckell Hamzah.

The first heat of the day involved Singapore’s Joanna Chan but from the start it was a race between Ainee Hernandez Delgado of Cuba and Annick Taselaar of the Netherlands. Taselaar pulled ahead of everyone with Hernandez close behind.

At the 500m mark, Hernandez was only 0.66 seconds behind Taselaar, who looked to be tiring as her strokes weren’t as long as before. Meanwhile, Joanna Chan, after her struggling start, seemed to have found her stride as she pulled ahead of Jovan Arsic of Serbia and Jana Hausberger of Austria, and was chasing Dirik Alara of Turkey.

Taselaar could not sustain her initial sprint and Hernandez put in a solid sprint for the final 250m to pull ahead and finish first, 1.64 seconds ahead. Hernandez qualified directly for the semi-finals with a time of 3:46.93.

In Heat four of the junior men’s single sculls, it was more straightforward as right from the horn, Rolandas Mascinskas of Lithuania blazed past his competition with power strokes and stayed ahead throughout the initial 500m sprint right to the end.

Ivanov Lurii of Ukraine looked like he would catch up at one point during the final 250mbut it was not to be. Mascinskas finished in 3:22.68 with Lurii a further 2.39 seconds behind in 3:25.68.

Nadzrie never really recovered after being left behind by the competition as he eventually finished last with a timing of 3:40.00, a massive 17.32 seconds behind the winner.

When asked about his performance, Nadzrie said: “I expected a better performance and it was pretty disappointing for me. I hope to redeem myself on Monday (in the repechage) and hopefully qualify for the semi finals.” 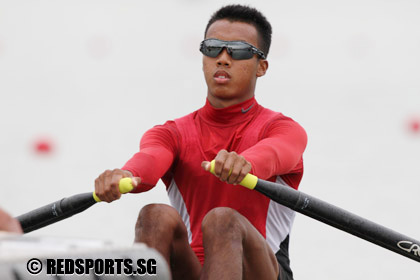 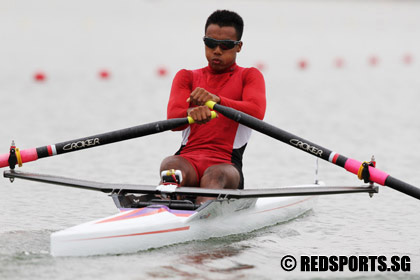 Nadzrie in action during the race. (Photo 3 © Marvin Lowe/Red Sports) 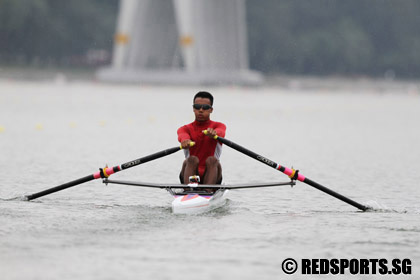 Nadzrie failed to qualify for the semi-finals but will have another chance in the repechage. (Photo 4 © Marvin Lowe/Red Sports)

The race stewards releasing the boats for the start of the women’s single scull race. (Photo 5 © Marvin Lowe/Red Sports) 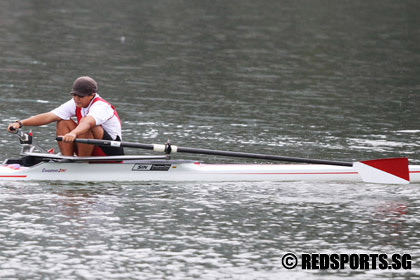 Joanna taking a breather at the end of her competition. (Photo 6 © Marvin Lowe/Red Sports)