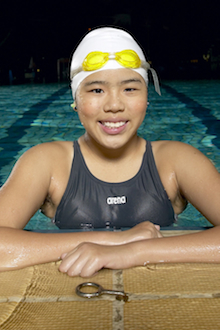 Yip Pin Xiu was the winner of the 2010 Singapore Youth Award in the Sports and Adventure category. (Photo courtesy of National Youth Council)

In recognition of her sporting excellence, she was named “Sports Girl of the Year” from 2005 to 2007 and was conferred the “National Colours Award” from 2006 to 2008. Pin Xiu made a splashing debut at the National Swimming Championships in 2004 and within just a year, she garnered her first gold medals at a regional competition.

She further distinguished herself as a world-class athlete when she won the first gold medal for Singapore, with a world record, at the Beijing 2008 Paralympic Games.

Beyond her sporting achievements, Pin Xiu conducts inspirational talks and demonstrative swimming events to advocate inclusiveness in sports. She was presented the “Meritorious Service Medal BBM” in 2008 and “Her World Young Women Achievers Award” in 2009.

The Singapore Youth Award is the highest honour conferred on youth aged under 35 in Singapore.

Mr Teo Chee Hean, Deputy Prime Minister and Minister for Defence, will hand out the awards at a presentation ceremony on Sunday, July 4th.

*The Medal of Commendation is given to past SYA recipients whose achievements and contributions after the Award have surpassed previous accomplishments for which the SYA was conferred.