NUS and Breakers set the pace in handball invitational 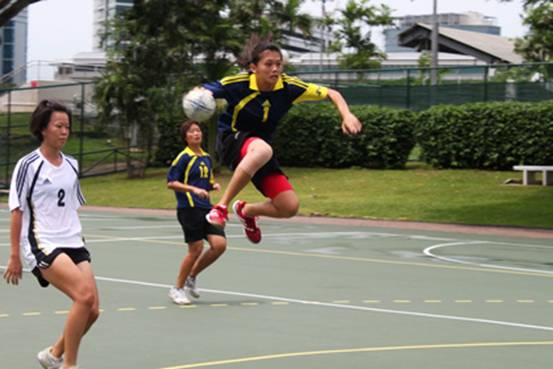 Breakers’ Neo Yi Xin (#1) beats her defender to the six-metre line for a fast-break shot at goal in the Breakers match against Temasek Hall. She is a versatile player and is well known for her good elevation and powerful shots at goal. (Photo 1 © Choe Yi Ying/Breakers Club)

NUS Sports & Recreation Centre, May 21-23, 2010 — The second weekend of the inaugural 2010 Breakers Handball Invitational League was jam packed with action as it featured five matches over three days. Through all the thrills and spills, the teams displayed great sportsmanship while competing against each other.

Organized by Breakers Handball Club, the invitational brings together two events, a Women’s Open League that is held from May 15th to 30th, and a Men’s Open Carnival scheduled for May 29th.

The team from the National University of Singapore (NUS) took on the fast and fit team from Nanyang Technological University (NTU) in their maiden match. The two teams last met at last year’s Singapore University Games where NUS dominated. This match was, however, not to be a repeat and was indeed a closely fought one.

The opening stages of the game saw the two teams matching each other point for point, as each peppered their opponent’s goal with shots. NTU were causing all sorts of problems for the NUS team who were still trying to find their pace in the game.

Anna Soo and Low Yi Lun, in particular, seemed to have forged a promising partnership and they spearheaded NTU’s attack. The halftime whistle abruptly halted the flow of the match at 9-6 in favour of NTU, giving the teams time to regroup.

The break appeared to have woken the NUS team up and they came into the second half determined to turn the game firmly in their favour. Their keeper, Eliza Lee, was a rock at the back, stabilizing her team with clinical saves.

At the other end, Amelia Siew’s string of strong shots and fast breaks helped give NUS’ the lead, and although the NTU team fought back well, they were unable to cut the deficit and the match was settled at 17–12 to NUS.

On the back of their win over NTU the day before, NUS lined up against Nanyang Junior College (NYJC) to kick off the fourth day of the Breaker’s Handball Invitational League.

Given that NUS had just played a match the night before, the ever-improving NYJC team may have smelt a hint of a chance at capitalizing on NUS’ fatigue.

That was, however, not to be as the experience players on the NUS team had clearly recharged and meant business. They took control of the match from the early exchanges by intercepting loose passes and launching waves of fast break attacks.

The NYJC team did not seem daunted by this, a sign of their growth over the past few games. They took their time to set up their own attack and establish their own game pace. One of these successful attacks paid off when their centre, Adele Lim guided a missile of a shot into the top right corner of goal, sending the NYJC into a rupture of cheers.

For NUS, the display of good play and tight defence continued. With their wingers, captain Sharon Ang and Stella See, outpaced and outsmarted their opposing defenders with intelligent runs and well-placed shots. This resulted in a comfortable 25-5 victory for their team.

The ominous clouds that hung over the courts threatened to postpone the second fixture of the day as the timely rain showered down with the end of the first match. Thankfully, the passing clouds cleared and despite a short delay, the match between Breakers and Temasek Hall was underway.

Temasek Hall started brightly with centre Sheryl Lim driving hard at Breaker’s defence and testing their keeper. Despite having a small team of inexperienced players, Temasek Hall’s display was one more suited for veteran teams.

The damp weather seemed to have a similar effect on the Breaker’s team who were uncharacteristically reserved in attack and mellow on defence. Though their plays were executed and runs well thought out, it was their keepers, Liow Wanyu and Tan Xueying, who were pivotal in ensuring that Breakers kept their edge in the game.

One of the highlights of the match was when Temasek Hall newbie, Bobbie Lee caught the defence sleeping and sent a shot flying towards goal for what looked to be a fairytale first goal for her. Breakers’ keeper Tan Xue Ying, however, clearly had not read the script and performed an acrobatic split that turned the shot out for a goalkeeper throw.

Temasek Hall continued to push forward and take their chances, but Breakers were always in the driving seat.

This match was billed as a thrilling encounter between two of the strongest teams in the league, as spectators took their seats expecting a good game of handball.

Breakers and NUS obliged as both teams came out fighting from the get-go, launching swift attacks and responding with even quicker counter attacks. Both teams appeared to cancel each other out as the score was kept deadlocked at 2-2 and again at 3-3 for long periods as neither NUS nor Breakers could get the upperhand in an exhilarating match.

After halftime break, NUS continued laying siege to Breakers goal, with shooters Joanne Foo and Trixie Tang putting the opponent’s defence line under a stern test. With the score at 10–9 to Breakers, NUS threatened to bring the game into yet another deadlock. However, the Breakers veterans found a vein of form and began to exploit gaps in NUS’ defence, stretching their lead.

The final stages of the game had everyone on their edge of their seat as earlier fouls came back to haunt the players and both teams had numerous players sent out for a 2-minute penalty. Penalties and free throws were given in quick succession as both teams upped the pace in the dying minutes.

With 30 seconds left in the match, NUS’ Joanne Foo intercepted a stray pass and sprinted towards goal, only to be illegally impeded and brought down by a Breaker’s defender. The referee duly indicated for an NUS penalty shot just as the time official’s whistle indicated the end of regulation time. Breaker’s keeper Liow Wanyu stepped up and defiantly turned away the penalty shot to wrap up the match at 16–11 to Breakers.

Great sportsmanship was shown between the two teams as they exchanged handshakes and big smiles afterward to put the icing on a great match of Handball.

As if inspired by the first match, Temasek Hall and NTU continued with the same pace and intensity. Bearing in mind that the two teams are still relatively young to the game of handball, with most players having little exposure in competitive matches, both teams’ attack and defence displayed an awareness and understanding of the game that belied their inexperience.

Temasek Hall’s players all came prepared in the mood to score as every single position threatened to breach NTU’s defence. Temasek’s second right-back, Sheena Tan also played a pivotal part in disrupting the normally fluid play of NTU with her good hustling.

NTU’s centre, Rose Tan controlled their play well, creating opportunities for her players and allowing her wingers like Fang Jia Bin the space to take shots. However, it seemed to be Temasek Hall’s day and they seemed to have the golden touch. Even when their centre Sheryl Lim awkwardly attempted a two-handed shot at goal, the ball found the back of the net.

True to the grit and spirited performances that NTU have been come to know for, they battled hard and strategically adopted a 3–3 defence system aimed to shut out Temasek Hall’s shooters. This change seemed to prove effective for awhile as Temasek Hall seemed to have lost flow in their attack.

However time soon wound down and NTU could not make up for the difference in score.

Special mention must be given to both side’s keeper. NTU keeper, Liow Wanting, stretched for every ball to keep her team in the game while Temasek Hall’s keeper, Koh Shaoyu, turned in a Woman-of-the-Match performance, preventing goals by sitting on the ball!

Temasek Hall’s co-captains Ham Jia Yun and Nur Hanisah beamed and waxed lyrical after their team’s win: “Perfection is not attainable, but if we chase perfection we can catch excellence.” 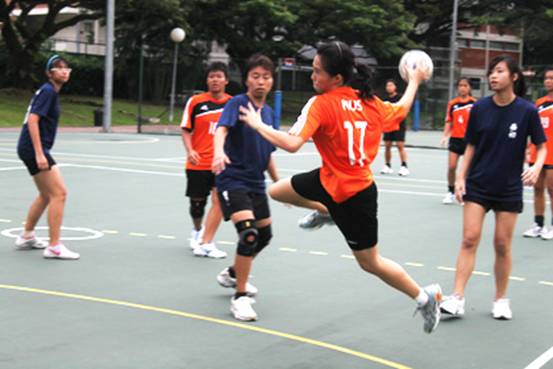 NUS captain, Sharon Ang (#17), flies into the six-metre area to convert the shot. Her endurance and speedy movements on court have also impressed many. (Photo 2 © Choe Yi Ying/Breakers Club) 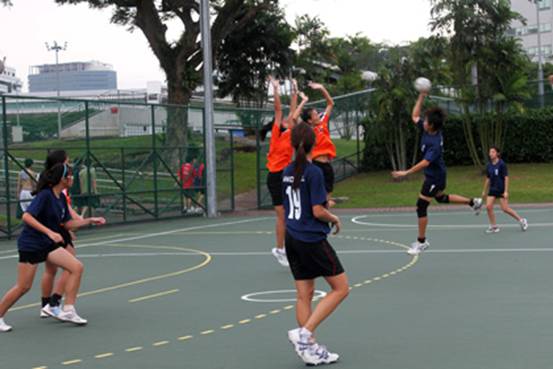 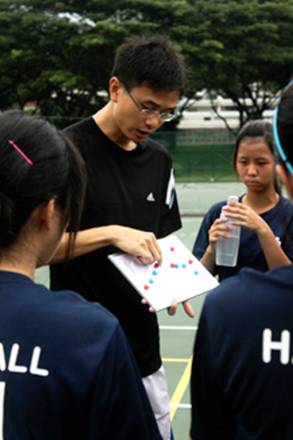 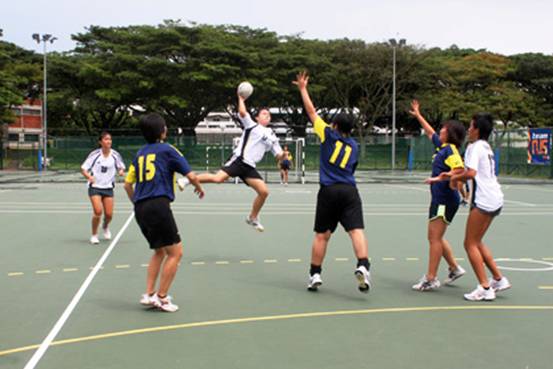 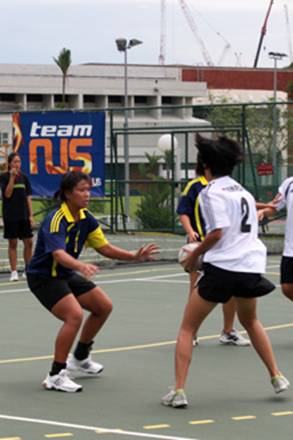 Wong Shin Yee (#7) from the Breakers Club prepares herself to defend her opponent by getting into a good defensive stance. (Photo 6 © Choe Yi Ying/Breakers Club) 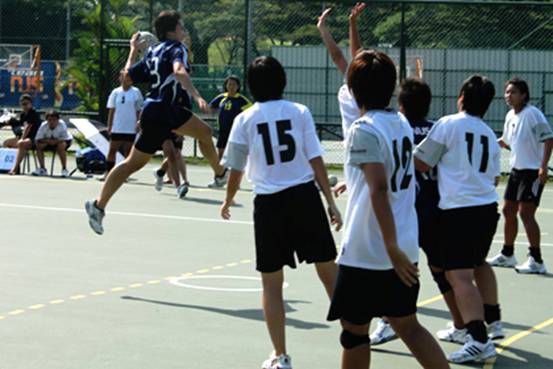 Amelia Siew (NUS #13), who is well known for her speed and aggression, makes a running long shot from the nine-metre line. She is one of the key players in Team NUS and is unstoppable once within six-metre range. (Photo 7 © Choe Yi Ying/Breakers Club) 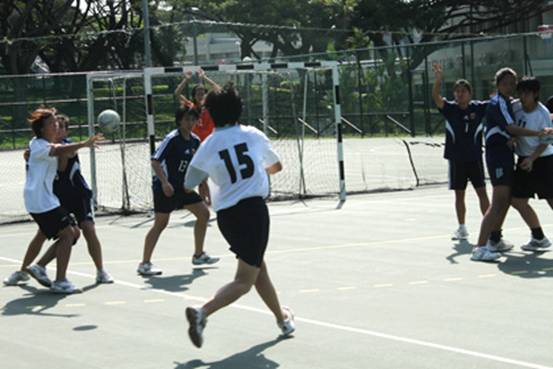 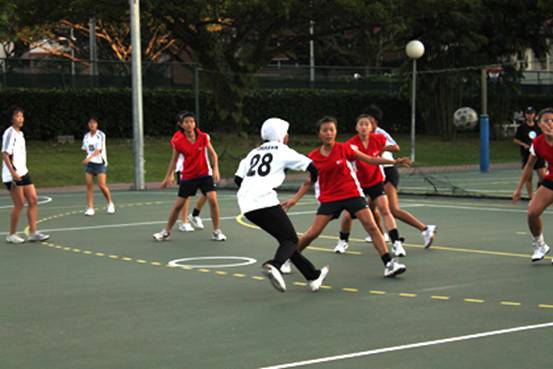 Hanisah (#28), the brain behind the Temasek team play, passes the ball around the court for her players to find the right chance to attack the goal. (Photo 9 © Choe Yi Ying/Breakers Club) 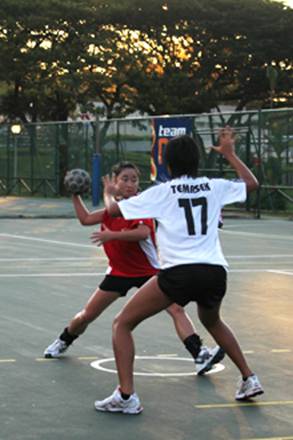 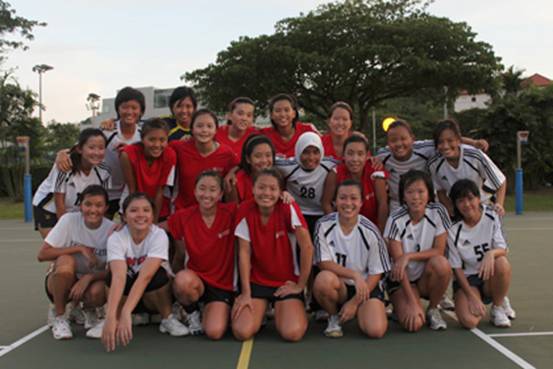