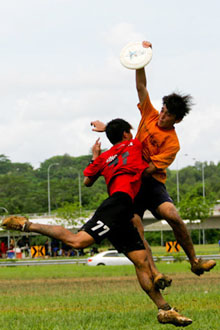 The tournament commenced with 17 men’s teams split into five pools and 10 ladies’ teams split into two pools. Every team had four or five games in the round-robin play on Day 1, and at least three games on Day 2 even if they did not make it into the semi-finals and final.

Saturday saw good weather before a huge thunderstorm came around in the early evening and resulted in the postponement of many games.

Sunday had very muddy fields due to the heavy downpour from the previous day but weather was relatively dry the whole day.

Here is a recap of some games as contributed by the various club-representatives.

Lagi Shiok was seeded seventh, while Hardcore was seeded fifth, but Lagi Shiok proved they were no walkover by giving Hardcore a relatively tiring and tight game. The last couple of points were turnover-filled but Hardcore managed to pull out the win.

A very close game up to the second half where fatigue set in for most of the Hardcore players and Freakshow took the opportunity to score a few points, won the game and proceeded on to the final.

Freakshow played solid, conservative offense and scored pretty much on every possession in the first half. Shiok was also doing the same, so both teams traded points up till 8-7 at the half. In the second half, Shiok got two breaks to go up 11-8 before Freakshow pulled back two points to 11-10 which was also when hard cap was called.

Freakshow scored another point to lock it at 11-11 for a final universe point to determine the Champion. Shiok marched it down the field pretty smoothly to score the final point, and took home the championship with a 12-11 score.

The all-ladies tournament allowed the women in the Ultimate community to try different things that, traditionally, would have been dominated by the men in the mixed format. Now, the women had to step up to fill certain roles that most of them had never had the chance to do so before.

For some younger teams such as DK Yellow and ACJC Wondergirls, GDM was a good platform for the girls to experience playing against stronger and more experienced women in the region.

For up and coming local club, Zero Discplacement (ZD), the tournament definitely showed the Ultimate community that they are a force to be reckoned with, especially so for their women who were seeded last, but who ended the tournament with an impressive fourth placement, just behind Shiok, Freakshow Green and DK Pink.

Freakshow White comprised some Freakshow players who had trained together in the last season, some new players with just over one year’s experience, some returning veterans, as well as some non-Ultimate players. It was a unique combination but the team gelled together pretty quickly on Day 1 of the tournament. They were meeting FS Green in the quarter-finals for the second time in this tournament (the first in the pool play).

Adamant about giving Greens as hard a game as possible, the Whites stuck true to their purpose. Both teams were trading points for the initial three points, and some very high-turnover points these were, that contributed to early fatigue for both teams. Eventually, the Greens picked up stride and went on to win the game with a score of 7-5.

It was a close game with both teams putting up a tight zonal defense. Good handling from the DK Yellow girls allowed them to exploit many loopholes in the Greens’ defense, especially when it was near to their end-zone. Both teams exuded patience and conservative offense, but FS Greens won the semi-final despite the hard fight put up by DK Yellow.

The Shiok machine came into the final having steamrolled all the other teams in the preliminaries and playoffs, including FS Green. The Reds immediately ran off to a three-point lead, with smooth offensive play and punishing hucks.

But FS Green were no rollovers this time. The gutsy Freaks (who were spotted over the weekend sporting designer “death ponies” and uncharacteristically cute rainbow butts) rattled the favourites by pouring in three straight points, albeit with help from uncharacteristic handling errors by Shiok. Into the half: Shiok with the slight edge, were up 8-7 at half-time.

The second half turned out to be a “who-hucks-farthest-wins” game. Both teams literally threw caution (and discs) to the wind, bombing their opponent’s end zone with their huck-and-cup.

FS Green relied heavily on their captain, Lesley Sim, who despite her diminutive stature, was a giantess on the field. She could also count on steady play from teammates Rachel Liew and Joanne Soh.

Shiok on the other hand, put in an all-around team performance from both young (Yanling, 19) and old (Serene Ng, age undisclosed) and stuck doggedly to their game plan.

In the end, Shiok’s line depth, along with their dominance in the air, paid off, with the Reds dominating FS in the second half to wrap up the match at 13-7, laying claim for now to the title of the best girls in Singapore.

All in all, an excellent showcase on what our Singapore women are capable of: full-field (well almost) hucks, great aerial Ds and layout bids.

As FS female captain, Jac Teo so wisely summed up in the huddle: “One small step for women, one giant step for women’s ultimate.”

Or something to that effect. 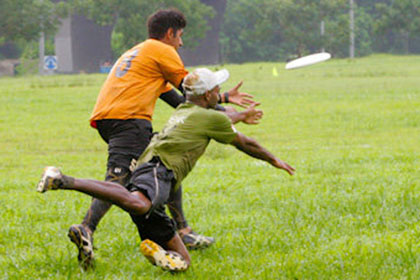 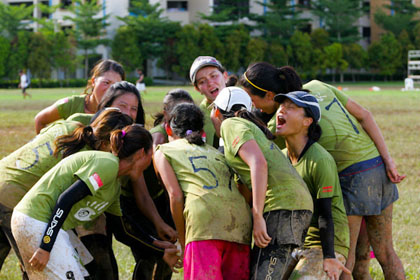 Freakshow Green huddle up for a cheer. (Photo 3 © June Yeoh) 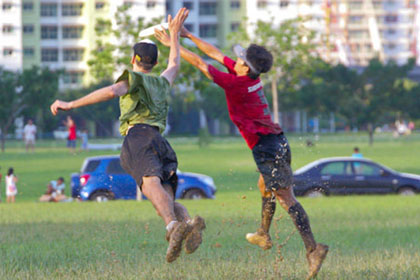 Shiok playing against Freakshow in the final. (Photo 4 © June Yeoh) 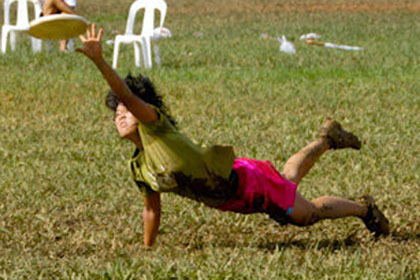