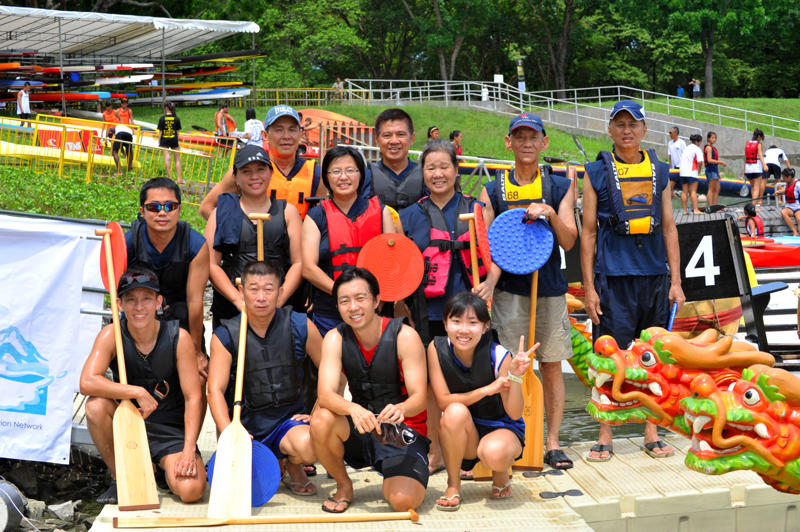 Bedok Reservoir, Sunday, April 25, 2010 – About 120 seniors proved that age is not a barrier to doing sports such as dragon boating by taking part in the People’s Association (PA) Paddle Championship 2010.

“Having a senior category provides a level playing field for them to participate and compete in. This is very important as seniors could then train and take part knowing that they will be pitting their skills against their peers,” he added.

“We hope that this new category will encourage more seniors to take up this sport and eventually more teams are formed amongst our grassroots organisations.”

44-year-old Rebecca Tan, Chairperson of Punggol 21 Community Club Senior Citizens’ Executive Committee participated in the PA Active Ageing Council Dragon Boat Race with 9 other members. She is encouraged by the enthusiasm showed by her senior members. This reinforces her belief that active ageing starts from young.

“The seniors are eager to improve their paddling skills. Besides their team practice in the reservoir, the seniors also practiced paddling at home. The seniors enjoy dragon boating as it helps them keep fit, stay healthy and build up their self confidence. Dragon boating helps to bring them closer as they develop friendship after attending the numerous training sessions,” she said.

Rebecca also encourages her seniors to bring their family members for dragon boating. For example, Mdm Lum Lai Ching, 63 years old, leads an active lifestyle and inspired her son, Kwan Kian Keong, and daughter-in-law, Qwek Le Leng, who are both in their early 30s, to join her in dragon boating sessions.

Le Leng is amazed by the energy displayed by her mother-in-law. Influenced by her mother-in-law, she took the bold step to participate in a non-conventional sport such as dragon boat. She also sees the value of engaging in a common activity with her family which not only helps to keep them healthy but also enables them to spend more quality time together.

Cheers to all the active agers who took part in the above race! 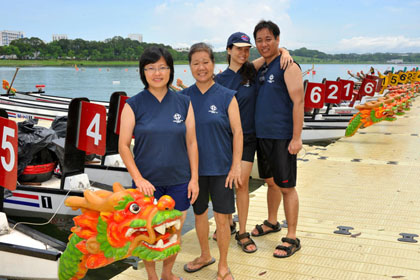 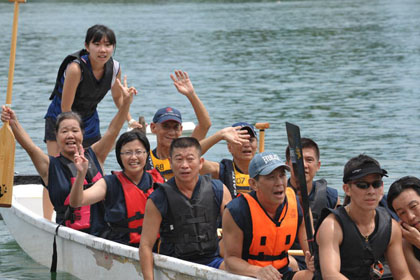 Rebecca Tan with her team after the race. (Photo 3 © People’s Association)