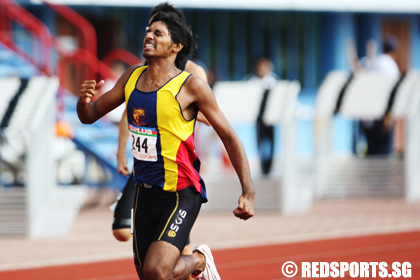 R. Avinash pips Yeong Yang to the finish by a whisker in the A Division 400m final. (Photo 1 © Marvin Lowe/Red Sports)

Choa Chu Kang Stadium, Friday, April 9, 2010 – Ng Chin Hui of Anglo-Chinese School (Independent) and R. Avinash of Anglo-Chinese Junior College both turned in smooth performances to win the B and A Division 400m titles respectively on the sixth day of the National Schools Track and Field Championships.

Chin Hui clocked a personal best (PB) time of 50.46 seconds to better his previous PB of 50.71s. Avinash meanwhile put in a strong finish over the last 100m to overhaul race leader Seow Yeong Yang of Raffles Institution and clocked a personal best time of 49.50s, narrowly missing the championship record of 49.35sec set by Shalindran Sathiyanesan of Millennia Institute in 2008.

Prior to the national inter-school championships, Chin Hui and Avinash had exciting encounters against each other at the National Junior Athletics Championships last month where they were both gunning for a place in Singapore's Youth Olympic Games (YOG) squad.

Then, Chin Hui suffered a heavy defeat by Avinash, managing only a 50.87s, more than a second behind Avinash's 49.86s. Chin Hui had later sat with his head in his hands, disappointed at his own performance, but displayed great fighting spirit to make a comeback just the day after, turning the tables on Avinash in the 200m final. Chin Hui clocked 22.50s to pip Avinash's 22.65s effort, and secured a place in the YOG team as a 200m runner.

With the duo competing in separate divisions at the inter-school championships, the stage seemed set for them to secure easy victories and have a crack at the championship records.

Chin Hui started his race fast and was in the lead by the 200m mark. He then began to extend his lead in the final bend, and coming into the home straight, held a 5-metre gap on Akhigbe Usunobun Uduehi of Northland Secondary. Akhigbe fought hard to close the gap but Chin Hui displayed composure beyond his years, keeping his form and holding off the challenge all the way to the finish.

Akhigbe ran a brave race to finish .4s off the champion in 50.86s, while 2009 C Division champion Dubey Kissan Kumar of the Singapore Sports School (SSP) won the bronze in 52.76s. Chin Hui later shared that he was "slightly disappointed not to beat the championship record of 49.75 (set by Jamie Ross Coates of SSP in 2008).”

“My next target will be the ASEAN Schools Games and the YOG held in July and August respectively, and I hope that the strong competition faced in those competitions will spur me on to better PBs. However, it will be difficult, as I am sitting for the ´O' level examinations this year, and will have to balance schoolwork with my sports," Chin Hui added.

While winning at the national school level has become a mere formality for Chin Hui, 2010 has been a breakthrough year for his A Division counterpart, Avinash. Despite being recognised as one of the most talented juniors in our local athletics scene, Avinash had never before won an individual gold medal prior to the 2010 season. He finally managed to break his duck in the A Division boys’ 800m final on Thursday, taking advantage of a slow tactical race and using his feared finishing kick to earn his first national inter-school gold medal. His strong finishing speed was again on display in the 400m final.

Having competed against Avinash since 2008, Yeong Yang of Raffles Institution was well aware of his rival and had prepared a brave tactic in an attempt to score an upset victory. As soon as the gun went off, Yeong Yang kicked into top gear and bolted into the lead, trying to establish as much distance between himself and Avinash as possible in order to survive the devastating last 100m sprint of the latter. The courageous attempt saw him draw approximately eight metres clear of Avinash as he came off the final bend into the home straight, but a fairytale ending was not to be. Avinash poured on the pace and blazed past Yeong Yang to win his second gold medal in two days.

"It's great, I had never won an individual gold medal at the national schools’ championships before, and now I have two," a visibly elated Avinash shared. "Having Yeong Yang in the race definitely pushed me to run harder an achieve the personal best, and I may have gotten even closer to the record had I not messed up my pacing at the start of the race."

When asked about his plans after the inter-school championships, Avinash replied: "I will take a short break, then begin preparation for the South-East Asian Junior Athletic Championships (SEA Juniors) which is coming up soon. I want to eventually cut my time into the 48s range, and try for Pandian's junior record of 48.2s."

Talented runners like Chin Hui and Avinash are tough to come by, and Singapore is blessed to have both of them at the same time. With adequate hard work, perseverance and support, they will surely be doing great things for Singapore on the international stage in the years to come. We wish them all the best in their athletic pursuits! 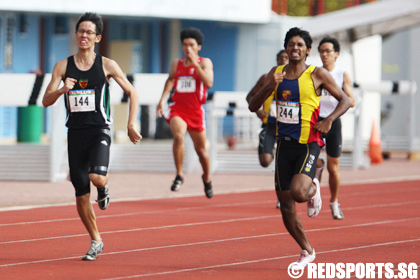 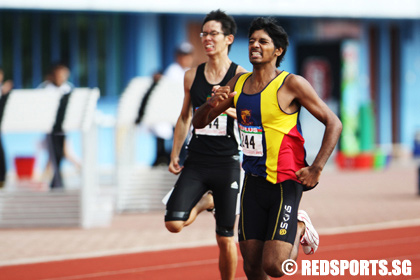 … but Avinash caught Yeong Yang in the last 10m and overtook him at the end. (Photo 3 © Marvin Lowe/Red Sports) 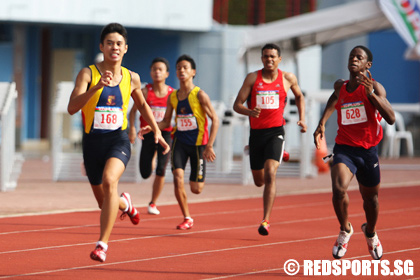 Chin Hui had a relatively easier contest in the B Division 400m final, sprinting to the finish with ease. (Photo 4 © Marvin Lowe/Red Sports) 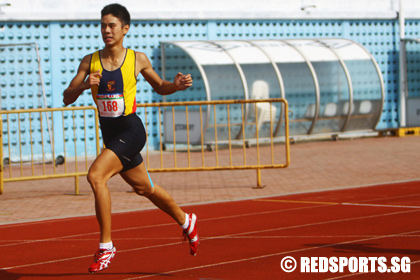 Chin Hui broke into a grin after coming out tops in his race. (Photo 5 © Marvin Lowe/Red Sports) 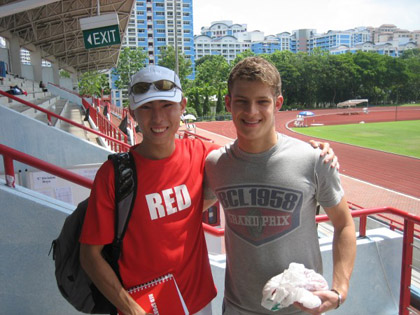 Soh Rui Yong with Jamie Ross Coates (right), the reigning B Division 400m record holder (49.75s). Jamie, who now resides in the United Kingdom, was back in Singapore on holiday and was spotted among the crowd at the championships. “I hope my record can stand a few years longer!” he jokingly commented. (Photo 6 © Soh Rui Yong/Red Sports)